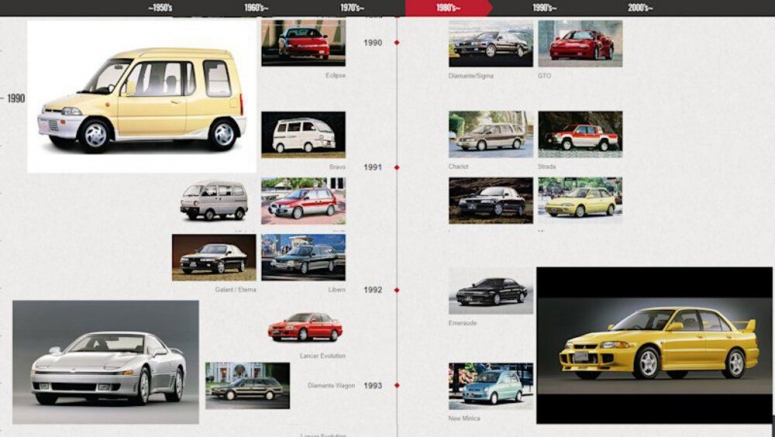 Former Autoblog editor-in-chief Mike Austin was kind enough to drop this little nugget onto Twitter yesterday: the history of Mitsubishi timeline on the company's press website. Basically, it's a virtual museum, spanning from the 1917 Mitsubishi Model A to the 2008 Galant Fortis Sportback. Frankly, it's not that surprising that they didn't go much further beyond that, but still, the timeline provides both a fun trip down memory lane and an introduction to fun and/or wacky JDM models we never got.

Besides showing photos, there's actually a sizable amount of info for each, which has quite clearly and often delightfully been translated from Japanese.

Take the New Minica Toppo that "adopted a 1:2 door configuration with a single door on the driver's side and two doors on the passenger side (think a Hyundai Veloster), as well as a 'Super High Roof' that added 70 mm to the height of the standard roof ... Addressing the desire to drive something a little different, the lineup was soon joined by a number of variants with personalities designed to bring more fun to the class and including the recreation specification Carabosse, the young mother and baby-oriented Marble, and the Town Bee with its round frog-eye headlamps projecting just forward of the leading edge of the engine hood." Also, check out those diagonal door handles.

There are more than just JDM kei car oddities, however. There's the Mitsubishi FTO, which you may remember from Gran Turismo and other racing video games from back in the day. It was "a car that delivered fun-to-drive qualities in abundance (and) was selected 1994-1995 Japan Car of the Year." If you didn't know, it was called the FTO because it slotted below the Mitsubishi GTO, the car you know as the 3000GT. I didn't know that before. Thanks, timeline!

There's also the off-roady JDM Delica vans that are now all over the Pacific Northwest having surpassed the 25-year import embargo. The 1994 Delica Space Gear (above left) was notable in that it moved the engine under the hood rather than beneath the front seats where it was previously (above right with the Delica Star Wagon), but according to the timeline "The Gear variant name was added in the belief that customers would become attached to it as a familiar 'piece of gear' for leisure and everyday purposes." Judging by the ones I see around here in Portland, mission accomplished. "Suspension was by double wishbone at the front and a 5-link with coil spring arrangement at the rear. The 4WD model used the Super Select 4WD driveline popular on the Pajero and with ample obstacle clearance angles and ride height delivered outstanding off-road performance."

There are also just some handsome regular cars we never got, including the Emeraude, a name adapted from the French word for emerald. Fitting, as the car above it was the Diamante (we DID get that; two generations, in fact). It's quite the handsome thing. There's a bit of early 1990s Mazda here, second-gen Integra there ... It had a 2.0-liter V6, which is definitely the smallest displacement V6 I've ever seen.

Finally, I got to take a trip down memory lane. At some point in the late '80s, my family took a trip to Florida and rented a car. Eagerly awaiting to find out what neat new car we'd be getting, my father reported that it was a Mitsubishi Mirage. We didn't have Mitsubishis in Canada, nor did I own any made by Matchbox or Majorette, so my dad might as well have said we were getting a Gerflounden Marflockel. I didn't believe him. I thought he was joking. Any way, judging by the timeline, the car we had belonged to the mid-80s generation introduced for 1983. In Japan, it was called the Lancer Fiore (shown above). It was also very ugly, which I also remember.

Things would soon change, however, as the timeline says "In January 1988, the 4-door sedan range underwent a full model change to a 'high-quality sedan for the style-conscious adult' theme (no word on five-year-old Canadian boys). This series also used personality distinguishing variant names include Vie, Fabio and Cyborg."

And now I want a Mitsubishi Mirage Cyborg. Actually, I definitely don't, but I'm glad it existed. Just as I'm glad this timeline exists. Thanks for the distraction, Mitsubishi.