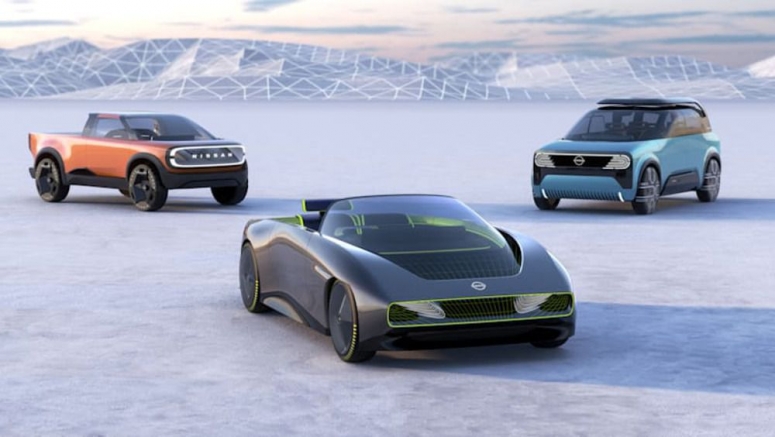 In May last year, Nissan unveiled its Nissan Next plan to get its operations in line with sustainable goals. That meant cutting capacity and operations to match what it considered rational, sustainable goals of around 5 million sales per year and 6% global market share. In January of this year, Nissan laid out plans to electrify every all-new model in key markets by the early 2030s, as well as develop more efficient EV manufacturing, powertrains, and technologies. Today the Japanese automaker has expanded on the goals with a product and technology roadmap it calls Ambition 2030.

The headline numbers are a 2 trillion yen ($17.7 billion U.S.) investment over the next five years, part of which will pay for launching 23 new electrified models, 15 of those being pure electric. The others will likely use the company's e-Power system, which adds a gasoline range-extender engine to an EV powertrain. Nissan wants its lineup and the Infiniti range to be 50% electrified globally by 2030, with goals differing for various markets. Europe is targeted for 75% electrified sales in the next five years; the aim for the U.S. and China is 40%.

As a glimpse of what kinds of "enhanced experiences through sophisticated technology packaging" could be on the way, designers worked up four electric concept vehicles. The Chill-Out is a "next-generation crossover EV" with Nissan's 4orce e-motor all-wheel drive, sitting on the CMF-EV platform that underpins the coming Nissan Ariya. This is probably a good conceptual idea of the next-generation Leaf, which is known to be switching to the CUV form factor. The Hang-Out is a compact, all-wheel drive #VanLife hatchback that wants to "provide a new way of spending time on the move" thanks to a reconfigurable living-room-like interior. The Surf-Out is a regular cab pickup powered by two motors that deliver off-road prowess and plenty of utility power. The Max-Out convertible concept is the wild one, an "ultra-lightweight," all-wheel drive, convertible sports car.

To power all of these plans, the automaker plans to hire 3,000 new R&D employees, develop more efficient, cobalt-free batteries. Nissan plan to build a pilot factory in Yokohama in 2024 to build solid-state batteries and have those batteries in production vehicles by 2028. It thinks the solid state units can reduce charging times to one-third their current levels, and drop pack prices to $75 per kilowatt-hour. There will be big investments in battery refurbishing facilities, charging infrastructure, and new EV36Zero production facilities that unite car and battery production. The company wants to be production 130 gigawatt-hours of battery capacity by 2030.

Expanded capability of the ProPilot suite of driver assistance features will be greatly enhanced by plans to install LIDAR units in "virtually" all news models come 2030. Beyond 2030, Nissan wants to be a carbon neutral company both for manufacturing and over the lifetimes of its vehicles by 2050.