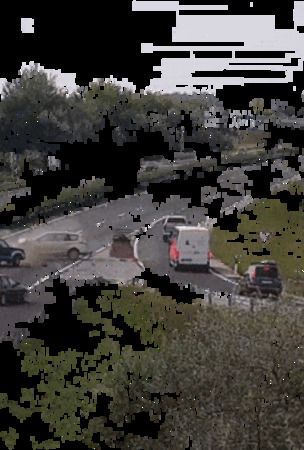 Terrifying security camera footage has captured the moment a pickup truck inexplicably turned into oncoming traffic along a four-lane motorway in Hungary.

The incident happened on September 11 and the footage shows the driver of a blue Nissan Navara towing a trailer along an entry road onto the highway. However, rather than merging onto the highway, the Nissan driver instead flicks on the left turn signal and makes a sharp left-turn into oncoming traffic and directly into the path of a silver MPV.

It appears as though the Navara driver noticed the error of their ways and can be seen hitting the brakes shortly after making the turn. However, it was too late to avoid the inevitable and the silver MPV T-boned the pickup.

Fortunately, the quick-thinking driver of the MPV didn’t slam straight into the body of the Navara and instead swerved to the right, hitting the rear quarter of the Navara and part of the trailer. The force of the impact separates the pickup and the trailer and, in all likelihood, softened the impact. Other drivers were able to brake just in time to avoid being involved in the crash.

It is hard to say why the driver of the Navara turned onto the highway like this; the lane onto the highway looks just like any other and the road markings are very clear. In any case, we hope everyone got out of this without any serious injuries.