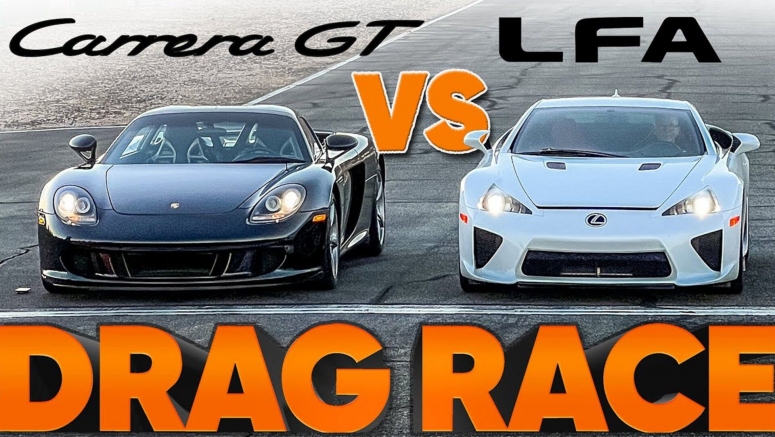 It’s rare to find an exhaust note that’s so emotionally evocative that most people will hold it in high esteem. Cars that sound that good don’t come along very often. A few of the exceptions, the Porsche Carrera GT, the Lexus LFA, and the Audi RS3, recently got together to film what is perhaps one of the greatest-sounding drag races ever. Jason Cammisa explains why that is and how a new Audi sedan can keep up with one of the world’s best-sounding supercars.

In fact, the tuned 200 does the quarter mile in just 10.5 seconds. Much closer is the battle between the RS3 and the Lexus LFA which lined up at the start as well. Both cars managed to hit the finish line 11.8 seconds after they began. They just do it very differently.

The Audi rockets off of the line and takes a commanding lead, but the Lexus reels it in from 60-100 mph (96-160 km/h) and then ends up seven mph (11.2 km/h) faster as the race finishes. From the start they both have one thing in common, though: a stunning exhaust note. Still, the duet is trumped when the LFA lines up against the Porsche Carrera GT.

The results are somewhat predictable again and the lighter and more powerful Porsche runs away with a clear victory. Why is it that all of these cars sound so good to our ears?

Under the hood of the RS3 is a five-cylinder engine, perhaps the last of its kind in a production car. Despite turbocharging, the RS3 manages to sound fantastic and feral. It does that in part because like all five-cylinder engines, the actual sound it produces is a perfect fifth, one of the most important harmonies in music.

As Cammisa explains, double the cylinders and you get a perfect tenth. Combine that with high RPMs and you get the high-pitched scream that we love so much from the LFA and the Carrera GT.