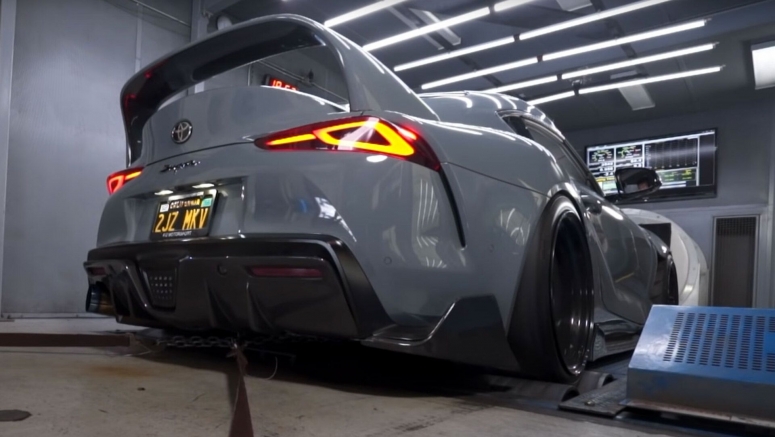 If you can get over its ‘BMW-ness', the A90 Toyota Supra is a very good sports car and has quickly proven to be extremely popular among tuning companies looking to extract more performance from it. The modified Supra featured in this clip from Hoonigan is one of the most remarkable we've come across.

In creating this Supra, the owner decided to ditch the standard BMW-sourced 3.0-liter turbocharged six-cylinder and has replaced it with the iconic 2JZ of the previous-generation car. This isn’t just any 2JZ either and while it retains the original displacement, it benefits from a series of significant upgrades, including new heads, cams, rods, and pistons. It is also rocking a massive Precision 7676 turbocharger.

Read Also: This Toyota Supra Drifter Has A Twin-Turbo 2JZ Engine And A Carbon Kevlar Body

Coupled to this engine is the same Getrag 420G transmission originally used by a BMW E46-generation M3 and a rear differential from an E92 M3. Other key upgrades made include Work wheels, new brakes, a large rear wing, and a single-exit tailpipe akin to the previous-generation Supra.

Eager to see how much power the car is making, the Hoonigan crew strapped it to the dyno and in the first run, it pumped out a disappointing 545 hp to the rear wheels. However, with some quick adjustments and a re-calibration to the dyno, that figure jumped to 917 hp at the wheels. For the third and final run, some air is let out from the tires to help with traction and it returned 897 hp at the wheels.

While these figures aren’t record-breaking for an A90 Supra, the owner insists the car’s powertrain is capable of handling more power. The car also has a penchant for spitting ferocious flames, just like the very finest A80 Supras out there.