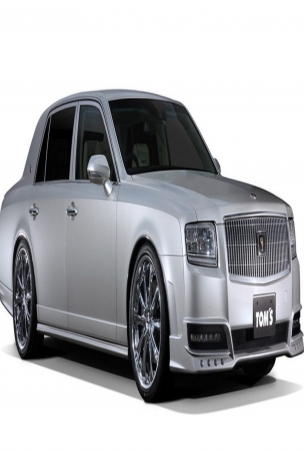 If you’ve always thought the Toyota Century looked a little too old fashioned for your taste, then perhaps this modded version currently showcased at the 2020 Tokyo Auto Salon will be more to your liking.

The body kit was designed by Toyota tuner TOM’s Racing, who will give this car a limited edition run of just 36 units, each costing a staggering 28.1 million yen, roughly $257,000.

For this much money, one would think you get a massive power upgrade but in reality, the tuner only improved the car’s throttle response and engine noise, leaving the hybrid power unit as is.

As for the interior, there are custom seats wrapped in Fine Nappa leather, although the tuner will let you choose what types of colors and stitching you’d like to see inside. Since this is a luxury car, there’s also plenty of standard safety gear, such as the Blind Spot Monitor, Parking Support Alert, Pre-Collision System, Lane Departure Alert, Radar Cruise Control, Adaptive High Beam and HelpNet, all part of the Toyota Safety Sense pack.

Severe Tropical Storm Dolphin is now heading toward Japan and could affect eastern and northern Japan on Thursday or Friday. Weather officials are warning that the country's Pacific coast could be in store for powerful winds and heavy downpours.The Meteorological Agency says the storm was 230...more

Japan's Pacific coast is expected to see powerful winds and heavy downpours as Severe Tropical Storm Dolphin approaches. The meteorological agency is warning of landslides and flooding in low-lying areas along the coast.The agency says the storm was over waters south of Japan at 3 a.m. on...more

Four endangered snow grouse chicks have made their public debut at a zoo in Tochigi Prefecture, north of Tokyo.The protected species is designated as a special natural monument in Japan.

Modification of Aegis Ashore said to be too costly

NHK has learned that the US manufacturer of the Aegis Ashore says the land-based missile defense system will be too costly to convert to offshore use.In June, Japan's government scrapped a multibillion-dollar plan to deploy the Aegis Ashore due to opposition from local municipalities and other...more

The president of the International Olympic Committee has shown his confidence in holding the Tokyo Games even under coronavirus restrictions.Thomas Bach posted a message titled "Olympism and Corona" II on the IOC website after sending it to athletes, IOC members and other related parties.

South Korea has again expressed its concerns about Japan's plan to release into the sea radioactive wastewater building up at the crippled Fukushima Daiichi nuclear plant.The first vice minister of South Korea's science ministry Jeong Byungseon was speaking at a general meeting of the International...more

The 2021 RDX is the latest in Acura's lineup to get the PMC Edition treatment. This limited-run, hand-built model follows the TLX and MDX PMC Editions and be finished in the same Thermal Orange Pearl that was pioneered on the NSX. Blessedly, the "PMC in PMC Edition doesn't stand for...more

Japan's Pacific coast could be in store for powerful winds and heavy downpours as Severe Tropical Storm Dolphin approaches.The meteorological agency says the storm was over waters south of Japan at 9 p.m. on Tuesday. It was moving north-northeast at about 20 kilometers per hour.

A 4-day holiday in Japan saw bigger crowds at some places than were seen between mid-January and mid-February before the spread of coronavirus.Mobile operator NTT Docomo gathered data on foot traffic while preserving privacy.