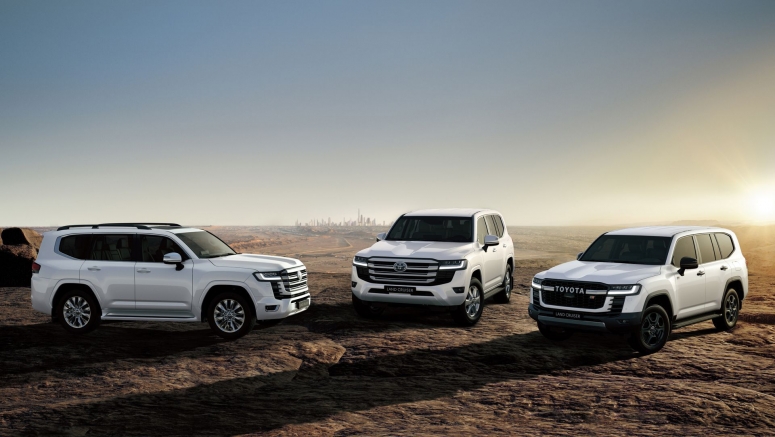 Just yesterday we were graced with the official presence of a brand-new Toyota Land Cruiser, which is a big deal. The current LC200-generation of Toyota's long-running SUV lasted for 14 of the model's 70-year existence. Sadly, it won't be sold in the United States, though a more luxurious Lexus version is likely on the way. In any case, considering the worldwide appeal of the Land Cruiser, the reveal was surprisingly short on information. A new series of videos from Toyota answers some of our lingering questions.

As we were already aware, the new Land Cruiser is based on an interesting mix of platforms. From what we can tell, stamped parts derived from the TNGA unibody are welded and glued together with a perimeter frame to make what should be a very sturdy chassis. Toyota says it's 20% more torsionally rigid than the outgoing version.

A revised suspension setup uses a different shock placement and the latest electronic version of Toyota's Kinetic Dynamic Suspension System, which decouples the sway bar for greater articulation off-road; Toyota says there is 30mm more than before. A front locking differential now joins the center and rear.

These hard parts are coupled with new or revised software designed to make the latest Land Cruiser as capable as possible over any terrain. The latest Multi-Terrain Select gets a new Auto mode that allows the vehicle to sense what mode would be best, altering control of the engine, suspension and brakes. The driver can also manually select Sand, Mud or Rock modes in Low range, or Dirt, Sand, Mud or Deep Snow modes in High gear. Toyota's well-known low-speed Crawl Control is also included, and it now includes Turn Assist that can lock the inside rear wheel to help the vehicle pivot in tight spaces.