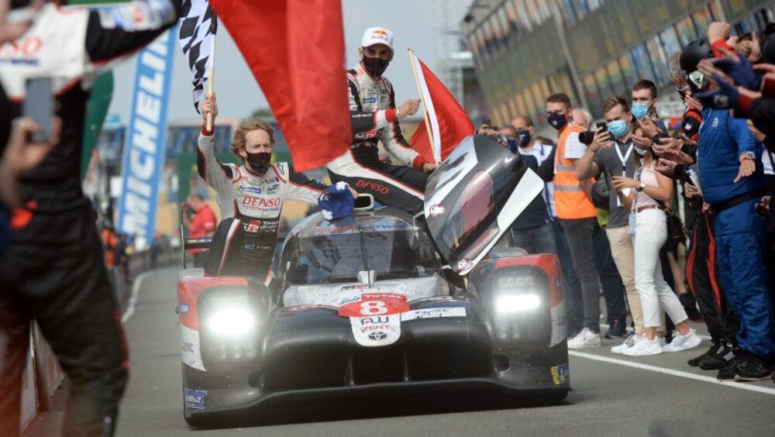 LE MANS, France — Toyota Gazoo's No. 8 car comfortably won the 24 Hours Le Mans by five laps from Rebellion No. 1 on Sunday to secure a third straight victory in the prestigious endurance race.

It was also a third consecutive win for Swiss driver Sébastien Buemi and Japan's Kazuki Nakajima driving. Brendon Hartley was the other driver, having replaced two-time Formula One champion Fernando Alonso.

Buemi and Hartley sat on the side of the car as Nakajima drove toward the podium. Hartley won for a second time after tasting success with the Porsche LMP Team in 2017 before an unhappy season in Formula One.

It finished one lap ahead of Toyota Gazoo’s No. 7, with Rebellion's No. 3 finishing in fourth place.

For much of the race it looked like Toyota’s No. 7 would win after leading comfortably from pole position. But late into the night the car encountered an engine problem and the 30-minute stop in the stands proved costly.

The race was first held in 1923. A total of 252,500 spectators attended in 2019, but there were none this year when the race started three months late because of the coronavirus pandemic.

"We miss the fans," New Zealander Hartley said. "I look forward to seeing all the fans again."

Toyota No. 7 took pole after former F1 driver Kamui Kobayashi narrowly edged out the Rebellion No. 1 team in qualifying.

In damp and humid conditions Mike Conway got away cleanly from the start, while Senna held off Buemi.

After nearly seven hours, Toyota's No. 8 fell back after a 10-minute stop in the stands to fix a brake-cooling problem on Kazuki Nakajima's car. Rebellion's No. 1, driven by Frenchman Norman Nato, took advantage to move into second place behind Toyota's No. 7.

Then came the decisive moment at 2:40 a.m. as the No. 7 — also featuring Argentine José María López — encountered a turbo problem. When the car came back out it was back in fourth.

"We had a few problems early in the race," Nakajima said. "Later they had a bigger issue than us."

Rebellion's No. 1 encountered a problem on the hood at around 9 a.m. and the change took six minutes, allowing the Rebellion No. 3 (Nathanaël Berthon-Louis Delétraz-Romain Dumas) to close the gap.

It was becoming a tight battle between the two Rebellion cars behind Toyota's No. 8.

At 12 p.m. Rebellion No. 3 with Dumas behind the wheel was only one second ahead of No. 1 driven by Menezes. Then both cars came in for a driver change with Delétraz swapping for Dumas on a lengthy stop, and Nato for Menezes as Rebellion No. 1 suddenly moved ahead of its team rival.

Dumas, a winner in 2016 with Porsche, appeared unhappy at the strategy decision to bring his car in first and the length of the stop. There were tense explanations in the team garage.

Colombian Tatiana Calderón, an F1 test driver with Alfa Romeo, was in the Richard Mille Racing Team in the LMP2 category. She was joined by German Sophia Flörsch — an F3 driver — and Dutchwoman Beitske Visser. They placed ninth out of 24 in their category.