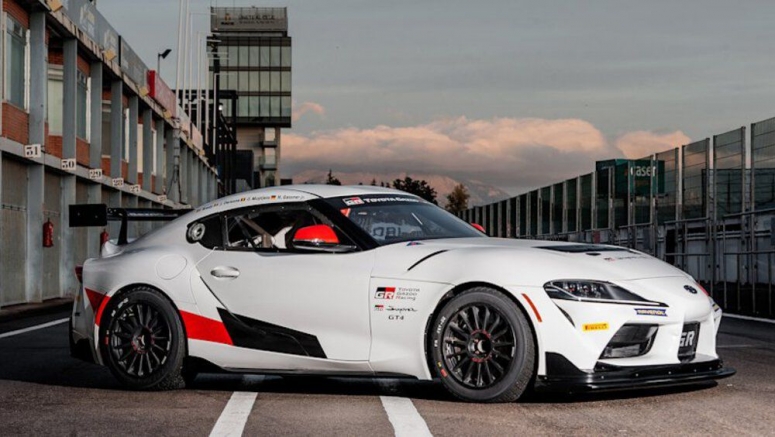 The Toyota GR Supra GT4 is finally ready to hit the track in an official series capacity. After extensive testing by European motorsport company Stéphane Ratel Organisation (SRO), the Supra completed the last stages of homologation and is now eligible for a variety of races across Europe. The first customer deliveries are expected to begin immediately.

The new Supra GT4 debuted in concept form in March 2019 and showed its production-ready face a few months later. Technically, the GT4 has already raced, but that was for the Nürburgring 24 Hours.

The GT4 is equipped with a turbocharged 3.0-liter inline-six that makes 430 horsepower and 479 lb-ft of torque, and Toyota notes there are "different power sticks available to comply with Balance of Performance (BoP)." That engine pairs with a paddle-shift seven-speed automatic, and power goes to the rear wheels. Toyota lists a weight of 2,976 pounds, much less than the Supra road car's curb weight of 3,397 pounds.

In addition to the carbon fiber aero kit, the GT4 car has a number of performance upgrades and tweaks. It has a Magneti Marelli ECU, a motorsport-spec limited-slip differential, an upgraded GKN Motorsport driveshaft, an Akrapovič racing exhaust system, Brembo brakes, KW adjustable racing dampers, 18-inch OZ wheels, and Pirelli rubber. For safety purposes, it has an ATL FT3 safety fuel cell, an FIA-approved roll cage, and an OMP racing seat with a six-point safety harness.

Because demand was so high, the first round of GT4 cars has already been sold out. Germany-based Ring Racing has purchased two cars with intentions to race in the ADAC GT4 Germany championship, France-based CMR will take one car to the European GT4 Series and another to the French GT4 Series, and United Kingdom-based Speedworks Motorsport will take a Supra to the British GT Series.

Orders have been taken for the next round of cars, and Toyota plans to deliver that batch in the summer.