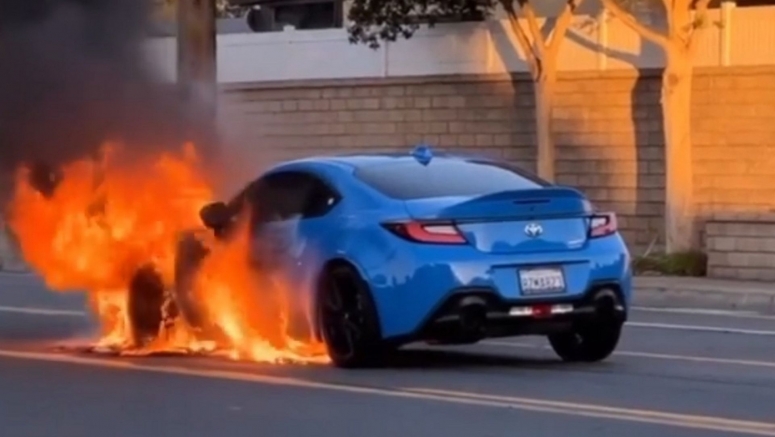 A Toyota owner from southern California was lucky to escape with his life after flames engulfed his GR86. The report follows other recent allegations of unreliability stemming from the sports car’s engine.

Instagram user @JZX_JK posted a video and photos of the fire, which he claims happened less than a day after he got his GR86 back from the dealership, where it had been for four months.

“As a lot of you know I’ve had this car in for repair the past 4 months @toyotaoforange I just go it back this morning, I’ve had the car for 12 hours and I pulled off the freeway to turn down my street and it burst into flames in my face!” he wrote on Instagram.

The reason for the fire was not shared, nor was what led it to requiring repairs in the first place. We have reached out to both the owner and Toyota for more details and will update this story when he hear back. The owner also suggested in comments that he would be suing the Toyota dealership that repaired his vehicle.

Read Also: Toyota Says That Using A GR86 On A Race Track Will Not (Necessarily) Void Its Warranty, Will Rebuild Owner’s Engine

A representative from Toyota USA replied to the video of the car on fire with the following comment on Instagram: “Hi, Josh. We’d like to speak with you about this experience further. When you have a moment, please send us a DM. We look forward to speaking with you.”

Although the reasons for the fire are unknown at this time, it is far from the only issue reported to be affecting the Toyota GR86 (and by extension the Subaru BRZ). An owner from Arizona, Blake Alvarez, recently posted about his saga with the car. Gasket material, which was allegedly applied too generously to the oil pan, seeped into and blocked the oil pickup in his engine and broke it. Similar issues have been reported by other owners.

So far, no recalls or technical service bulletins have been issued for the GR86.