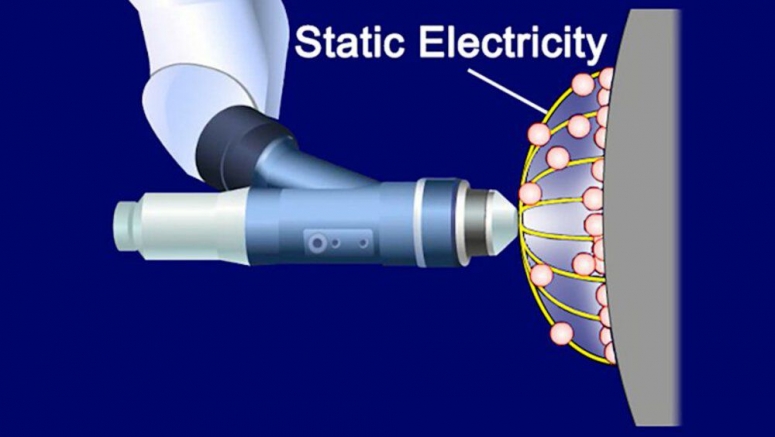 Automotive manufacturers are in a constant state of searching for newer, better, faster, and overall more efficient ways to produce their cars, not only in regards to to time and money but also to pollution. Toyota's latest technology, an airless paint atomizer, addresses all three.

Toyota claims to have the the first airless paint atomizer used to paint car bodies in the world. By using this technology, Toyota says it achieves more than 95% coating efficiency, meaning what actually sticks to the body, in comparison to 60 to 70% efficiency from a normal paint atomizer that does use air. In addition to painting cars more quickly and effectively, this technique could potentially reduce the Toyota Group's carbon dioxide emissions by about 7%.

The machine arms for both the air paint atomizer and the airless paint atomizer are similar, but the small parts that distribute the paint at the tip of the gun are very different. The airless atomizer has a rotating tip that creates centrifugal force when spinning. That tip has roughly 600 grooves that are meant to direct the paint. Once the tip gets going, it draws the paint into the grooves while creating an electrostatic umbrella toward the car. The paint slides through the grooves, forms into tiny dots, and is drawn to the body of the car for more accurate painting. With air, the paint is essentially thrown at the body and what sticks sticks, while much is lost to rebound.

An issue with this type of paint process is the uneven nature of car bodies. If the distance between the paint gun tip and the body is fluctuating, it becomes difficult to maintain a steady electrical current. Toyota engineered its atomizer to eliminate that issue by monitoring the variations and automatically adjusting the current. To ensure evenly distributed and sized paint particles, the spray gun maintains about 3.9 inches of distance between the tip and the car body.

For now, Toyota is using this technology in its Takaoka and Tsutsumi plants in Japan, but the expectation is the airless paint atomizers will be used throughout the Toyota Group's global manufacturing. Toyota is also looking into licensing the technology to other companies. The video above further demonstrates how the process functions.