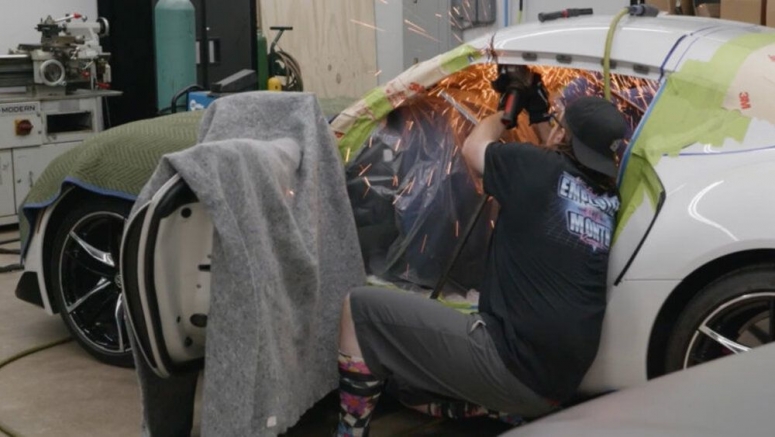 It's not often that we see behind the scenes of SEMA builds, but Toyota is taking us there right now. Two builds are in progress, but the Supra project has the majority of our attention.

The main appeal is watching the roof be cut out of the brand-new Toyota GR Supra. You can see it happen in the video at the top of this post. Of course, the joy of removing the roof from the new Supra stems from the targa top option of the previous Supra. The fifth-gen Supra is only available in hardtop coupe form, but if you really want a Supra convertible, just buy a BMW Z4.

SEMA is the place for outrageous and interesting things, though, and cutting the roof out of a fifth-gen Supra falls into the category of the latter. Toyota dropped a rendering of what the finished project would look like a short time ago, but seeing the roof off in the flesh makes it all that more real. Unfortunately, the video ends before Toyota gives us any true glamour shots. It’s still a lot rough around the edges in the shots that we do see, so we’re looking forward to the finished product.

The other project Toyota is working on right now is truck-related. You can watch the video directly above. Toyota teased this weird truck and trailer build a month ago. It uses the rear half of a Tacoma as a trailer, meaning you have a double truck bed: the bed on the actual truck, and the one you’re towing behind it.

In addition to this, Toyota looks to be adding a ton of utility to the trailer section with pull-out drawers of all sizes hiding a multitude of useful camping items. There’s even a toilet seat. Hoorah.

There will be more episodes like this coming. We’re especially intrigued by the Supra build. If it looks good enough, Toyota might just need to offer a proper targa version of the Supra down the road.