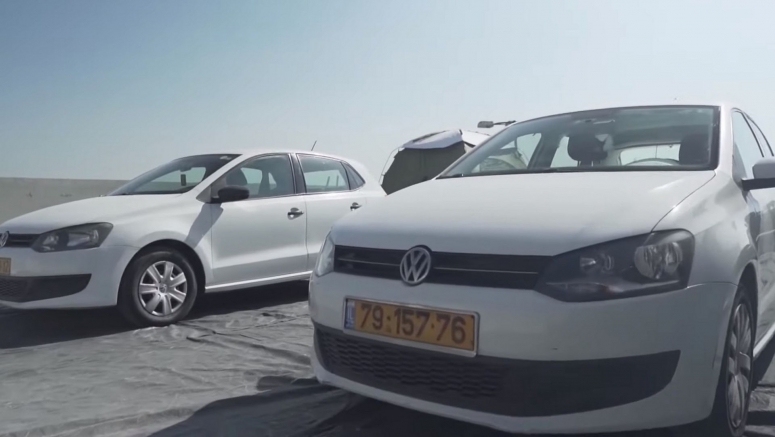 Automakers, especially in this new era of EVs, are almost always trying to conserve power. But dumping energy, under the right circumstances, may actually be ideal and that’s what a company named SolCold is working to do.

The Israeli startup is working on a material that uses anti-Stokes fluorescence to reflect the heat coming from the sun back out and away from a car (or any other object humans might not want to keep too hot, like buildings, silos, and others) to keep it cool.

The technology has attracted the interest of major automakers like Toyota and Volkswagen, whose Polo participated in a recent demonstration of the effects of the proprietary coating, which can be applied to a car like a wrap.

Read Also: Australia Could Soon Have Glow In The Dark Road Markings

What’s really impressive, though, is that the third car, which had no coating on it but was parked under a parasol to give it shade, had a cabin temperature of 40°C (104°F). That means that the SolCold coating, in this demonstration, was actually more effective than shade at keeping a car cool.

Speaking to The Drive, SolCold said that, depending on the size of a car’s cabin, its material could reduce the temperature by anywhere from 20 to 70 percent. That will take a lot of pressure off the A/C unit for cooling a car down and, as the manufacturer points out, could save a life if a child or a pet gets left behind in a vehicle.

How it does this remains the topic of some secrecy but the basic concept is that the material uses a multi-layer construction. The middle layers absorb energy coming from the sun and reemit them at higher frequencies. The bottom layer, meanwhile, reflects light without absorbing it and to cap the system off, there is a top layer, though what it does is strictly confidential. Ultimately, the coating has the effect of cooling the car below.

The materials used in SolCold are neither toxic nor to they contain rare earth materials, the company says. The reflected energy won’t dazzle passersby (or apartment dwellers above), either, because of the design of the nanostructure, which diffuses light.

Currently in the prototype phase, SolCold could be ready for production later this year. That will then be used on a Volkswagen concept car and, if it turns out to work and to be cost-effective, it may make it on production cars.