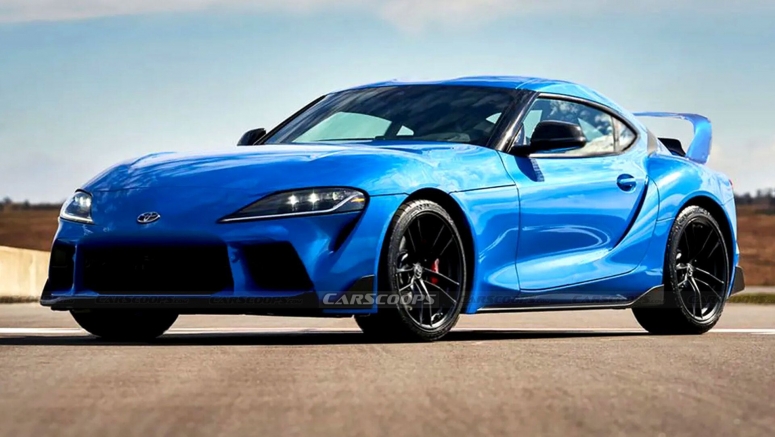 It’s been two years since the Toyota Supra’s return, but even now after the release of the new A91-CF Edition, some people still aren’t sold on its styling. That begs the question: how do you make a car more palatable to fans of its previous generation? The answer is plain and simple: make it look more like it.

The main issues people seem to take with this design can by and large be boiled down to two things: it’s too busy, and it doesn’t look enough like its predecessors. To fix those things, we took the liberty of (digitally) making some changes to clean up the design as well as make it look more like the Mk4, all while attempting to keep the modern Toyota design language. Pictured below is the Mk5 Supra, specifically the A91 edition, and the red circles highlight which parts of the car will be changed.

The first changes are at the rear. The Mk4 Supra‘s side windows joined the C-pillar with more of a rounded shape than the Mk5, and while it’s not the same as the old car’s, it was changed to more of a pointed oval than the sort of rounded triangle it is now. Moreover, in addition to the ducktail spoiler, there’s also a sizeable rear wing that bring to mind that of the previous generation.

Moving forwards another complaint people had about the Mk5 Supra was that the proportions just weren’t quite there when compared to the Mk4 and FT-1 concept. To remedy that, the front wheels have been moved forward slightly to not only increase the wheelbase, but also reduce the front overhang. Also, the side reflector, fake fender vent, and cut line for the door vent have all been removed in an attempt to clean up the design a bit.

Finally, arguably the biggest changes are at the front. The prominent “nose” of the current model has been smoothed out and the front fascia looks noticeably different. Moreover, the center intake on the front bumper is much larger, while the side ones have shrunk in size.