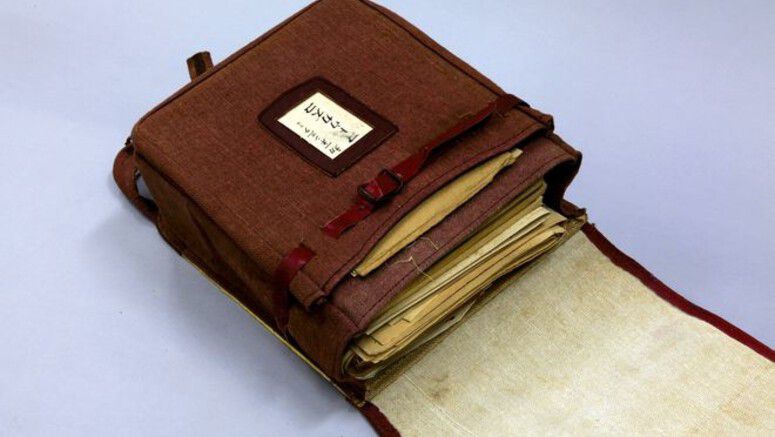 Yoshiaki Seien found 100 old posters in his storehouse that were collected by his father, who worked as the local head of a civil defense unit during World War II.

The posters are rich in details that reflect the atmosphere of the wartime period, such as informing citizens of an event to show off airplanes made through their donations. Another poster calls on residents to vote in a gubernatorial election held after the war.

He was advised by an acquaintance to donate them to the National Showa Memorial Museum, or Showakan, in Tokyo.

"I think my father would be happy if people who were born after the war can get a sense of the life on the home front during wartime through these posters," Seien said.

Many Japanese who are cleaning their homes and storage spaces may find their grandparents’ diaries or daily items used during the war, which ended 75 years ago.

Such items, instead of taking up space in storage, are valuable finds for museums such as the National Showa Memorial Museum.

About five years ago, a 61-year-old man in Aichi Prefecture found a brown fabric school bag in the back of a closet at the house of his mother's older sister. Inside were a notebook and report card, which he discovered belonged to his mother’s younger sister.

His mother then told him for the first time that her younger sister, who had been sick, died in an air raid shelter in 1944. She was in her first year in elementary school.

Believing it could be a precious wartime memento, the man asked the local board of education if they knew of a place to donate it. The school bag was eventually donated to the National Showa Memorial Museum, which displayed the item at a special exhibition at the museum last summer.

The museum was built by the then Ministry of Health and Welfare in 1999 and has been requesting donations of wartime-related items.

Items on permanent display at the museum include "good-luck" belts stitched together by 1,000 women for Imperial Japanese Army soldiers, textbooks used in schools and a teacup stamped "Made in Occupied Japan."

Of the approximately 64,000 items on display, 70 percent were donated.

Curators at the museum ask donors to share stories related to the items they are donating. The museum will display the stories along with the items when they are put on exhibit.

"Personal belongings carry the stories of life on the home front, such as how the war affected the daily lives of people," said Kazuhiro Watanabe, the head curator at the museum.

"But in many cases, such items are often not considered valuable objects. So please reach out to us (if you have any such items) and consult us first."

While there used to be a slew of war-related items in many homes, "many objects must have been lost over time such as privately published war stories and mimeographed copies that were never stored in the national library," said Saburo Takahashi, a professor emeritus of sociology at Kyoto University.

In Japan, many public documents were burned by the military and local governments after the war. Senyukai--a group of veterans who have been passing on their war stories--also has seen its numbers dwindle over the years. Many of those groups have been disbanded.

"We need to build a system where people protect war-related items and make them accessible to the public," Takahashi said.

The first step to donate war-related items is to call museums and ask if they will accept the items. Museums have set thresholds on accepting donated items.

The museum accepts calls regarding donations from 10 a.m. to 5:30 p.m. daily except for Mondays.

The museum exhibits daily products that reflect the lives and struggles of the nation between 1935 and 1955, such as clothing and stationery.

The museum collects medical-related items such as clothing of injured soldiers, and diaries and records that show how the injured were treated during the war.

The health ministry opened the museum in 2006 after receiving a request for opening the facility from a disabled veterans' group, which was disbanded in 2013.

The center accepts calls regarding donations from 9 a.m. to 5 p.m. daily except for Mondays.

The library stores books, magazines, diaries and letters that date between the Manchurian Incident of 1931 and the San Francisco Peace Treaty signed in 1951. Many of the items are available for public viewing, and the library houses rare items such as privately published war stories and newsletters of veterans associations.

* Other than listed above, some local museums, universities and research institutes also will accept items if they match their needs.

Remembering the Battle of Okinawa 75 years on

Hummer H1 Vs. Suzuki Jimny Drag Race Is The A...

Abe apologizes for arrests of the Kawais

Potential Price Of The Sony PS5 Revealed On A...