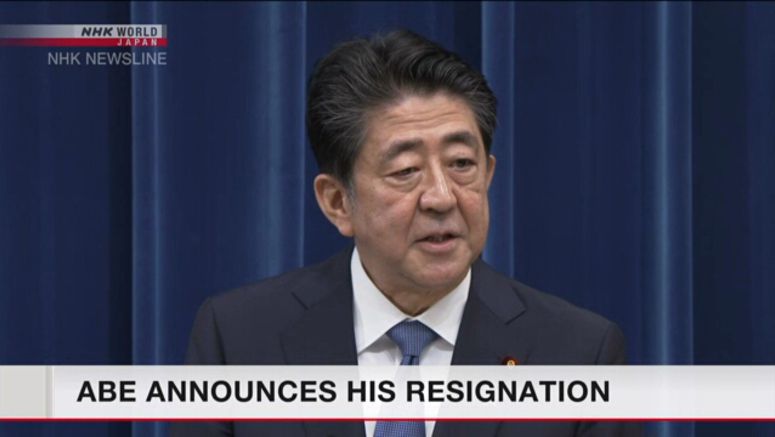 Japan's Prime Minister Abe Shinzo has formally announced his intention to resign due to a relapse of an inflammatory bowel disease.

At a news conference on Friday, Abe said that a regular checkup in June showed signs of a recurrence of ulcerative colitis, and that he began feeling physically worn down as his condition worsened around mid-July. He said doctors confirmed a relapse in early August.

Abe said he was given a new type of medicine in addition to the one he's been taking. He said a follow-up exam on Monday showed the new medicine was working, but it has to be taken continuously and the outlook is unclear.

Abe said the most important thing in politics is to produce results. He said he should never be allowed to make political misjudgments, weighed down by his illness, treatment and lack of physical strength.

He said now that he can no longer confidently respond to the people's mandate, he should not remain in his post.

Abe said he struggled in deciding when to announce his departure, given the coronavirus outbreak. But he said he chose this timing due to the recent declining trend in infections. He also cited Friday's agreement by a government taskforce on a new set of policies to deal with the virus toward winter.

Abe said he offers his heartfelt apologies to the people for quitting amid the pandemic and before realizing numerous policies. He expressed the utmost regret for failing to resolve the issue of North Korea's abductions of Japanese nationals.

He also said it also breaks his heart to leave half way through his wish to conclude a peace treaty with Russia and amend Japan's Constitution.

Abe suggested that he will continue to carry out his duties until the next prime minister is in place.

Abe's tenure as the leader of the main ruling Liberal Democratic Party is set to expire in September next year.

LDP lawmakers plan to decide next week how and when to elect his successor.