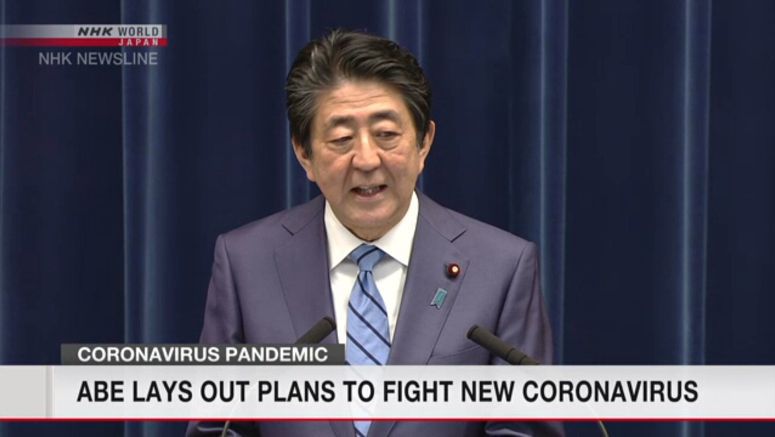 Prime Minister Shinzo Abe has laid out his government's plans to fight the new coronavirus. He discussed a newly enacted law that allows him to declare a state of emergency, if needed.

Abe said "This legislation is to prepare for emergencies. When the administration determines whether to declare a state of emergency, that would put restraint on various private rights. It will seek for recommendation from experts in making the decision carefully. Currently, the number of infections is still rising. However, the increase speed is slower compared with other countries where the speed of infection in accelerating. Given the situation, it is not necessary to declare a state of emergency now."

An emergency declaration would allow prefectural governors to order schools to close, and people to stay home.

It would also enable governors to requisition land and buildings for emergency medical facilities -- without the owners' consent.

It's been two weeks since Abe asked elementary and high-schools across the country to close temporarily.

He said students should be allowed to go out to exercise and relieve stress.

Abe said "Schools are planning to have their graduation ceremonies. I would like them to carry out the ceremonies by implementing safety measures."

The prime minister referred to the impact of the pandemic on Japan's economy, and on global markets.

He said he will take all steps necessary to put the country's economy back on a steady growth track once the outbreak is contained.

Abe also promised to increase the capacity to conduct testing for the virus.

Abe said " Within this month, it is expected that up to 8,000 people will be tested in a day. With these tests, so-called cluster-infections will be detected and responded early, and diagnosis will be available early also to prevent serious cases."

He said the government has secured more than 12,000 beds for patients at hospitals across the country that can treat infectious diseases.

He added that the number of artificial respirators to treat patients in serious condition will be increased.

Abe also mentioned the cruise ship that was docked near Tokyo.

Abe said "On the cruise ship of Diamond Princess, the quarantine of all the crews and passengers is expected to finish tomorrow. The battle against the invisible virus inside the ship whose total number of people onboard was more than 3,700 has been an unprecedented, extremely tough mission, but we have finished the quarantine for all."

Abe said he wants Tokyo to host this summer's Olympics and Paralympics as scheduled, by working closely with the IOC and other organizations.