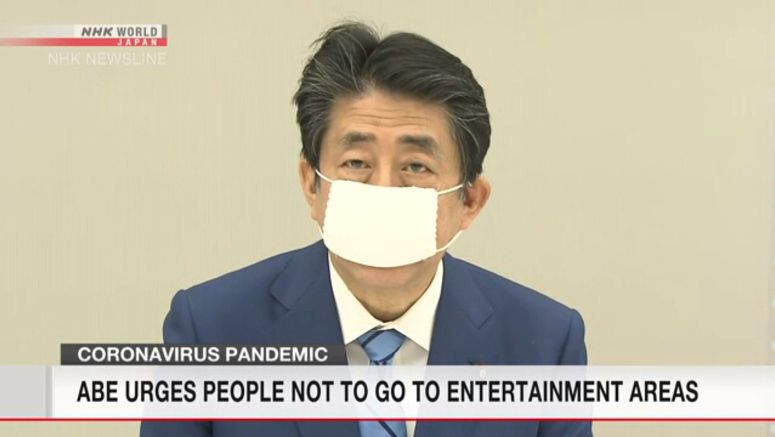 Prime Minister Abe Shinzo has urged people around the country not to visit restaurants and bars operating at nighttime.

A month-long state of emergency was declared on Tuesday in seven prefectures based on a revised law.

In its basic guidelines to deal with the outbreak, the government had already strongly urged people to refrain from going to entertainment establishments in the seven prefectures.

On Saturday, at a meeting of the government's coronavirus task force at the prime minister's office, Abe said many people who contracted the virus were found to have visited entertainment and amusement districts in those prefectures. He said the trend was also observed in other parts of the country as well.

Abe said he decided to call on people to avoid not only bars, nightclubs, karaoke bars and live music venues which fall under "closed, crowded places and close-contact settings", but also restaurants and bars across the country where staff and customers come into close contact with one another at nighttime.

He said people need to reduce interaction with others by "at least 70, or preferably, 80 percent" in order to end the state of emergency in one month, and that people's further cooperation is crucial in achieving that goal.

Abe also instructed relevant cabinet members to ask businesses in the seven prefectures to take measures so that their employees can work from home, and, in cases where commuting is necessary, cut the number by at least 70 percent.

Abe said that while many companies have switched to teleworking for all employees as a rule, the reduction in the number of commuters has been insufficient.

He also said he plans to oversee the distribution of an additional 10 million facemasks to medical facilities in the seven prefectures to ease the shortage of supplies.