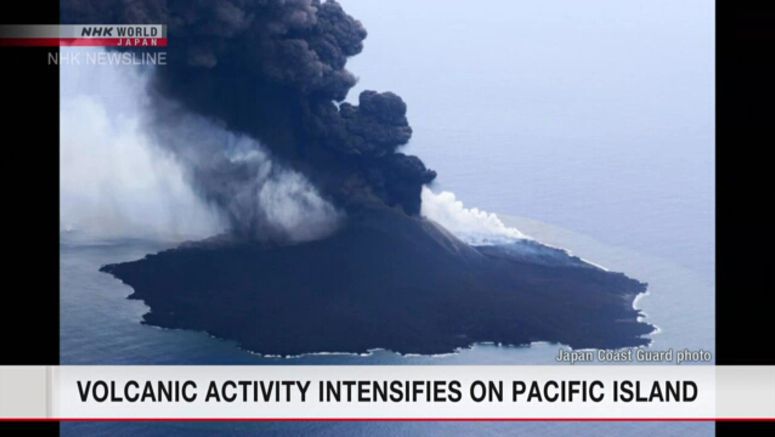 Volcanic activity is intensifying again on a remote island far south of Tokyo. A crater is belching large volumes of magma and towering plumes of ash.

The activity has picked up at Nishinoshima since mid-June, with plumes reaching nearly 2,000 meters. The uninhabited island in the Pacific is about 1,000 kilometers south of Tokyo.

As of 3 p.m. Friday, Japan time, data from a weather satellite showed smoke reaching a height of 4,700 meters. That's the highest since observations began.

The Japan Coast Guard spotted eruptions of magma from the central crater in an aerial survey on Monday. Massive lava flows are reaching the southwestern coastline, expanding the land area.

Tokyo Institute of Technology Professor Nogami Kenji has been observing the island since eruptions there were first confirmed in November 2013.

Nogami says the volcano appears the most active now, fueled by massive supplies of underground magma. He says close monitoring is necessary, as the outflow of lava may continue for a long time.

Nishinoshima had grown to 12 times its initial size by May 2015, about 18 months after eruptions began. It is said to be unusual for lava flows to continue so long.

Eruptions have continued on and off since then.

The Meteorological Agency has issued a warning about flying rocks and lava flows within 2.5 kilometers of the crater.