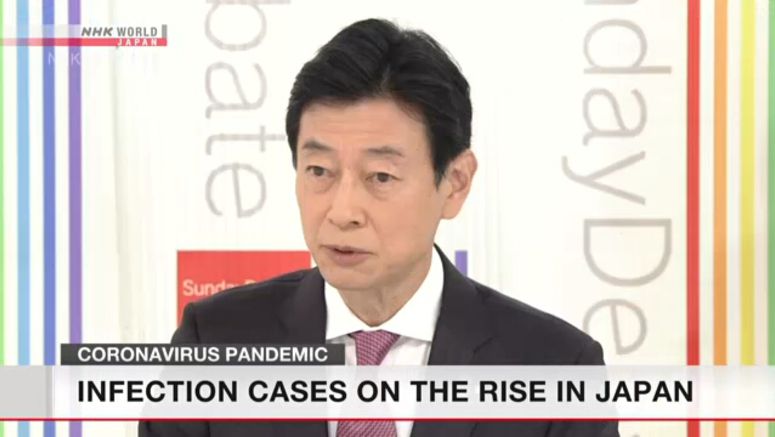 Japan is seeing a surge in coronavirus cases across the country. Daily cases topped 3,000 for the first time on Saturday. The spread of infections will likely affect the way people spend the year-end holidays.

The minister in charge of the COVID-19 response said the government is approaching the situation with a sense of extreme urgency.

Nishimura Yasutoshi said, " I share a sense of crisis that we need to further strengthen measures while working closely with the governors of areas where infections are spreading. The government will do its utmost to implement measures for the four regions of Hokkaido, the Tokyo metropolitan area, the Chubu and Kansai region."

The year-end holidays are approaching. But some things will be different this year. Two million people usually visit this shrine in Saitama prefecture near Tokyo during the first three days of January. But some people are already worshipping instead of visiting during the New Year holidays.

Restaurants are implementing preventive measures in an effort to attract customers during the holidays. A pub in Tokyo has introduced a robot to serve food to promote non-contact with customers.

The Tokyo Metropolitan Government confirmed 480 new cases in the capital on Sunday. The figure is the highest ever for a Sunday.

Japanese Association for Infectious Diseases President Tateda Kazuhiro says, " It is inevitable that medical care and testing services will be understaffed over the holiday period. Stronger anti-infection measures will be necessary."

Across Japan, more than 2,300 new cases were confirmed on Sunday. More than 580 people are in serious condition. The total number of infections nationwide has topped 181,000. Over 2,600 people have died.