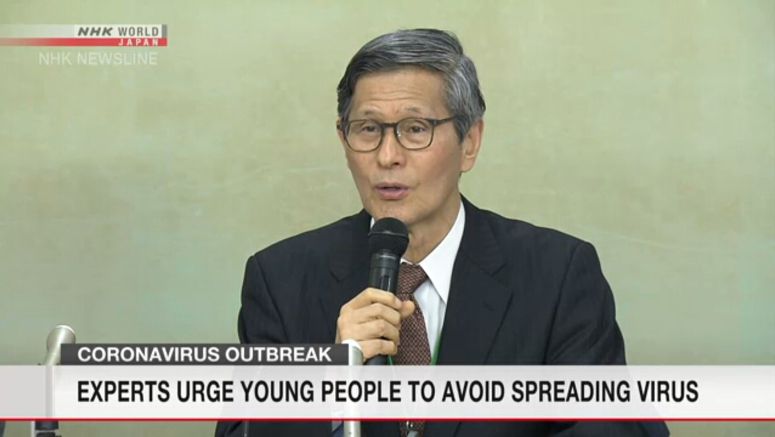 Health experts in Japan continue to refine the advice they offer in response to the coronavirus outbreak. They're now urging people, especially younger generations, to be on the alert even if they don't show major symptoms.

Japan Community Healthcare Organization President Shigeru Omi said, " We have come to believe that people with mild symptoms play an important role in spreading the virus without knowing it. In particular, young people are unlikely to become seriously ill, making it very difficult to see the danger they may pose to others. As a result, they infect many middle aged and elderly people, putting them at risk."

Professor Omi is the deputy chair of a panel of experts convened by the government.

He says about 80 percent of infected people do not spread the virus. But he notes there have been cases in which a single carrier has infected multiple people in enclosed spaces with limited ventilation.

These include concert venues, gyms and buffet-style restaurants.

The experts say avoiding such crowded places over the next two weeks could help contain the outbreak.

They are urging younger people to refrain from going out if they have mild symptoms of the type produced by the common cold.

They say that could save lives among the older generations.

The advice comes after experts analyzed the situation in the northern prefecture of Hokkaido, which has the largest number of cases in Japan.

Most tourist spots there have been closed. Businesses have been severely affected.

A store clerk said, " Several people visited here on Saturday, but there were even fewer on Sunday. I'm concerned about the situation as the outbreak is having a big impact on retailers."

Some retailers say they fear they will have to cope with a prolonged slump in business.

Japanese authorities have recorded more than 970 infections to date.

Hokkaido tops the list with more than 70 cases, followed by Tokyo and Aichi prefectures.

More than 700 of those came from the British-flagged cruise ship, the Diamond Princess. All the crew members had left the ship by Sunday.They will be quarantined for two weeks at a government facility near Tokyo.