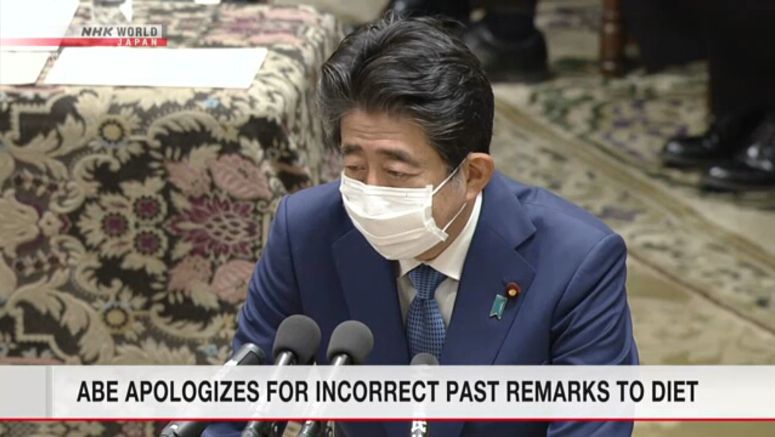 Former Japanese prime minister Abe Shinzo says that some previous comments he made in the Diet regarding parties held by his political support group were not factually correct and offered an apology.

Abe was speaking at a Diet committee meeting on Friday, one day after prosecutors brought a summary indictment against his secretary for allegedly misreporting income and expenditures related to the parties.

The parties in question took place on the eves of government-funded cherry blossom-viewing events during Abe's term as prime minister.

Abe had repeatedly explained in the Diet that all the parties' expenses were covered by the participants. He had insisted there was nothing to be included in the political fund reports because there were no revenues or expenditures related to the events.

Abe told the committee that investigations have shown his support group shouldered some of the costs of the parties, but failed to declare them on political fund reports.

The former prime minister said he feels morally responsible even though he had no knowledge of the accounting process. He said he extends his apology to the people of Japan and to lawmakers.

Abe said there were some past comments he made in the Diet that were not supported by the facts.

He said he wants to explain the issue and correct the errors.

An opposition lawmaker suggested that Abe should resign his Diet seat in light of social norms and rules for legal compliance.

Abe replied that what he said in the Diet was true to the best of his knowledge after checking the facts with the persons responsible. But he said he alone is responsible for making factually wrong statements.

Abe said he will reflect on what happened and work hard to restore public trust. He said he will straighten himself out and strive to make improvements.