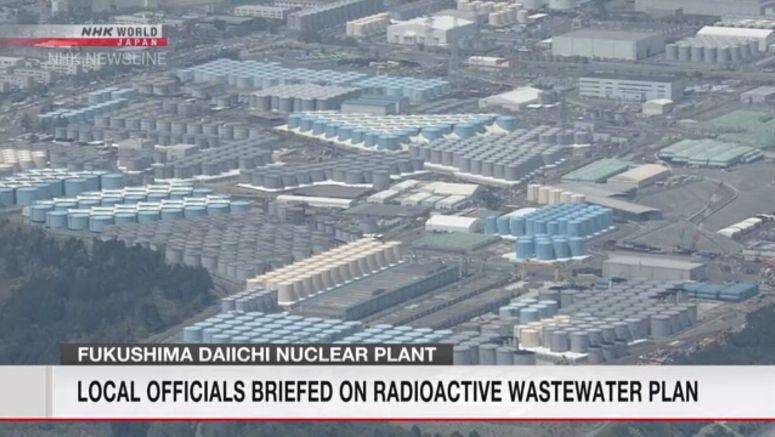 NHK has learned that Japan's government briefed local authorities on how to dispose of radioactive wastewater stored at the damaged Fukushima Daiichi nuclear power plant.

Local sources say the briefing was based on the premise that the water will be released into the sea. The idea has not been supported by the fisheries industry and others.

Sources say the economy ministry on Thursday briefed local governments including those of the towns Futaba and Okuma, which host the plant.

Water used to cool molten nuclear fuel from the 2011 accident at the plant is treated to remove most radioactive substances, but tritium and others remain.

The volume of treated water has topped 1.2 million tons.

In February, a ministry panel proposed releasing the water into the sea or vaporizing it into the atmosphere after diluting it to a level that meets environmental and other standards.

The sources say the ministry explained how much the level of tritium will be lowered, and that the government will set up a conference for members of the public and private sectors to discuss ways to address harmful rumors.

The government has held hearings seven times on the disposal method, with attendance by local people and members of related organizations. Many participants expressed caution about releasing the wastewater into the sea.