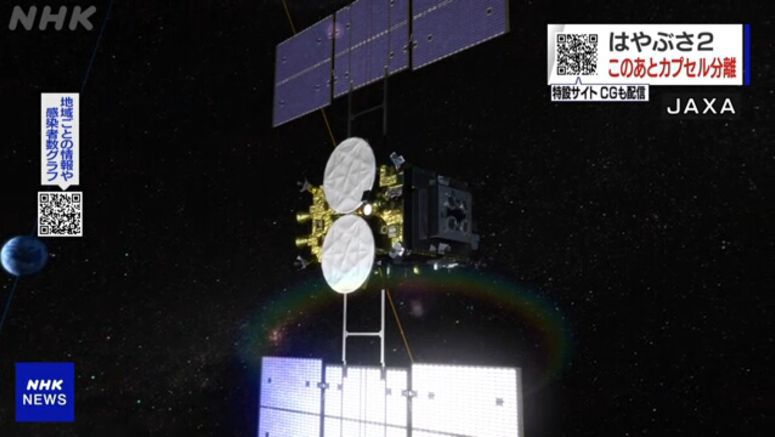 The project team of the Japan Aerospace Exploration Agency, or JAXA, says the release of the capsule, believed to contain sand from the asteroid Ryugu, will take place at 2:30 p.m. Saturday, Japan time, at 220,000 kilometers from Earth.

Hayabusa2 is already closer to Earth than the lunar orbit.

The release system will be used for the first time since the spacecraft's launch 6 years ago and the scientists will confirm the release with a slight change of the attitude of the probe.

After the release is confirmed, Hayabusa2 will reorient itself to head for another asteroid. The scientists hope the probe can record images of the released capsule and perform other tasks.

The capsule is scheduled to enter Earth's atmosphere shortly before 2:30 a.m. Sunday, Japan Time, before landing in a desert in southern Australia.

Weather in the area around the landing site is forecast to be fair.

If successful, it will be the second time for Japanese scientists to collect samples from an asteroid. Hayabusa2's predecessor performed a similar mission 10 years ago.