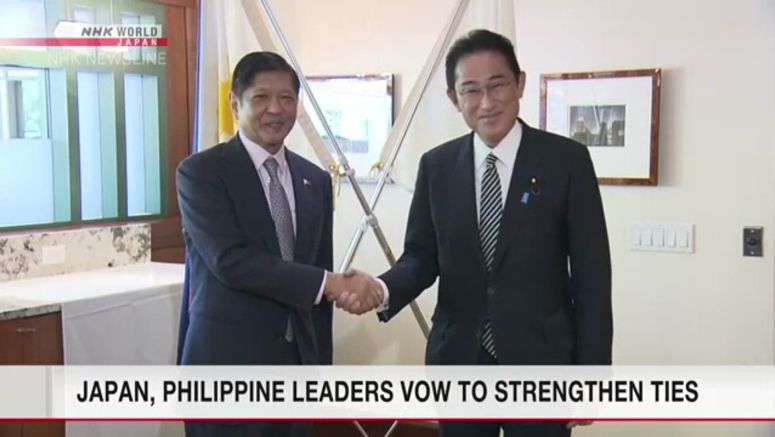 The leaders of Japan and the Philippines have agreed to work together on resolving issues such as the situation in the East and South China seas, where Chinese maritime activity is increasing.

Japan's Prime Minister Kishida Fumio talked with Philippine President Ferdinand Marcos Jr. at a working lunch in New York on Wednesday. The two are in the US city to attend the UN General Assembly.

Kishida told Marcos that he places importance on cooperation with the Philippines, which he called a strategic partner that shares basic values with Japan, for advancing a free and open Indo-Pacific.

Marcos responded that he hopes to strengthen his country's relationship with Japan.

The leaders agreed to further enhance bilateral relations, including cooperation in the security field.

They also exchanged views on the issue of the East and South China seas, the Ukrainian situation and North Korea's nuclear and missile programs.

The two agreed to cooperate on resolving these challenges.

They also confirmed that the two sides will continue arrangements for a visit by Marcos to Japan at an early date.