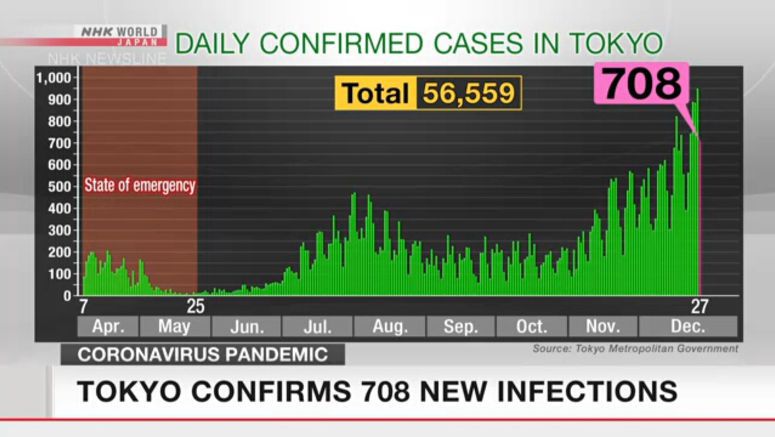 A total of 2,948 new cases of the coronavirus were confirmed across Japan on Sunday.

The Tokyo Metropolitan Government reported 708 new cases, the highest-ever figure for a Sunday. The daily tally for the capital has topped 700 for the fifth straight day. The number of patients in serious condition reached 82, the highest since the state of emergency was lifted in May.

Officials say the rate of people testing positive for the virus is also on the rise in Tokyo. The rate was in the 3 percent range in September and October, but rose to 6 percent in mid-November.

The positive rate reached 8.2 percent on Friday. The last time it was at this level was on May 3rd, when the state of emergency was still in place.

Japanese Association for Infectious Diseases President Tateda Kazuhiro said, "The high positive rate shows that cases are rapidly increasing. Many people who have not been tested may be carrying the virus."

There were more than 220,000 positive cases in Japan since the pandemic began. Over 3,200 people have died.

The health ministry says the number of serious cases stands at a record high of 659.