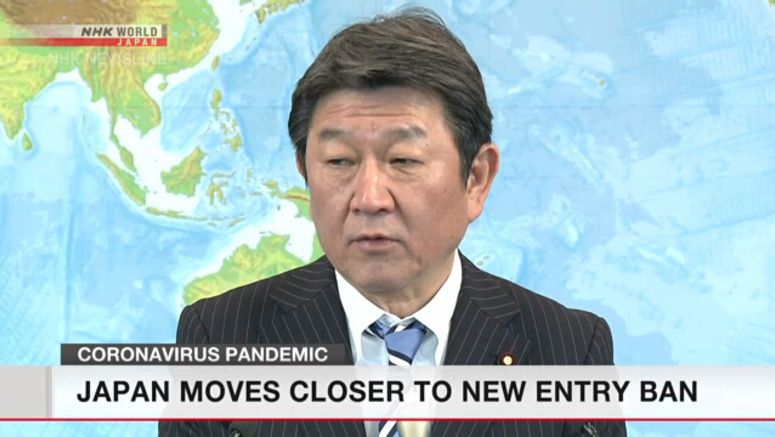 Japan is planning to place an entry ban on foreign nationals from an additional 49 countries and territories as the coronavirus pandemic expands.

Foreign Minister Motegi Toshimitsu revealed the plan on Tuesday. The additional areas will include the United States, Canada, and all of China and South Korea as well as Britain and Greece, covering most of Europe.

The updated list will cover a total of 73 countries and territories, including Africa, South America and parts of the Middle East.

Foreigners who have been to any of those regions within 14 days of arriving in Japan will not be allowed entry.

Motegi also said the Foreign Ministry raised travel alerts for those 49 countries and territories to level 3, urging Japanese nationals to avoid traveling to them.

The alerts for all countries and territories other than those ranked level 3 were raised to level 2. Japanese nationals are being warned against making any non-essential trips to such places.

Japan's Chief Cabinet Secretary Kato Katsunobu says the government will look into a minor collision between a Japanese patrol vessel and a Taiwanese fishing boat as necessary and deal with it in an appropriate way.The Japan Coast Guard says the incident took place in Japan's territorial waters off...more

A museum in Tokyo is offering visitors the opportunity to better appreciate a centuries-old work of art with the help of cutting-edge technologies such as 5G smartphones.The Tokyo National Museum says new devices will allow visitors to see expanded details and animated characters while viewing a...more

The Nissan Cube sold very well in its Japanese homeland, but struggled to find many North American buyers during its 2009-2014 sales run over here. As was the case with its boxy Scion xB competitor, the target demographic of youthful Americans looking for a "mobile hub" (Nissan's term) seemed...more

Mazda has announced pricing and specifications for the MX-30 range in the UK, which joins the already available First Edition model.

Few vehicles define a segment quite as clearly as the 2021 Subaru Crosstrek. Before it came along nine years and one generation ago, there really weren't any subcompact crossovers. Today, competitors like the Honda HR-V, Hyundai Kona and Jeep Renegade keep popping out. Unlike those, though, the...more