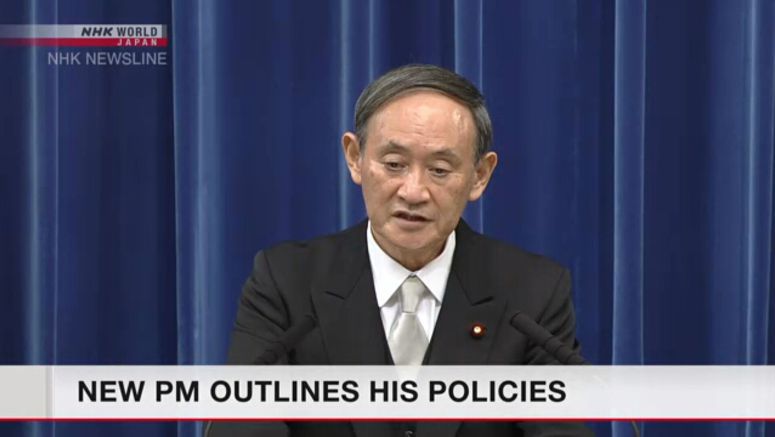 Japan's new prime minister says he will prioritize measures against the coronavirus and its economic fallout. Suga Yoshihide is taking over from Abe Shinzo, a close ally who was Japan's longest-serving prime minister.

Suga said, "We can never afford to have a political vacuum when our country is facing a grave challenge. To overcome the current crisis and give the public peace of mind again, we need to push forward with the efforts the Abe government had been making. That is my mission."

Suga says he will do all he can to prevent an explosive increase of infections, which many other countries have experienced.

He said, "We will expand our effective and efficient testing system. We'll also secure sufficient medical capacity. We are trying to obtain enough vaccines, by the end of the first half of next year, to cover everyone."

And he vowed to revitalize the economy while preventing the spread of the virus. He mentioned measures to protect jobs and subsidies to help businesses continue their operations. Suga also revealed his vision for the post-coronavirus era.

Suga said, "The coronavirus has highlighted the need to review our digital networks and supply chains. We also need to continue allowing online medical services, which have been launched recently. We will also strongly promote the provision of personal computers and internet infrastructure to schools in the post-coronavirus era."

Suga says he plans to set up a new government agency in charge of digitalization to carry out those measures.

The new prime minister already has several major political and diplomatic events in his schedule. He is expected to deliver a policy speech at an extraordinary session of the Diet in the coming weeks. A G20 summit in Saudi Arabia and the US presidential election are scheduled for November. And the country is gearing up preparations for the Tokyo Olympic and Paralympic Games -- set to begin in July next year.