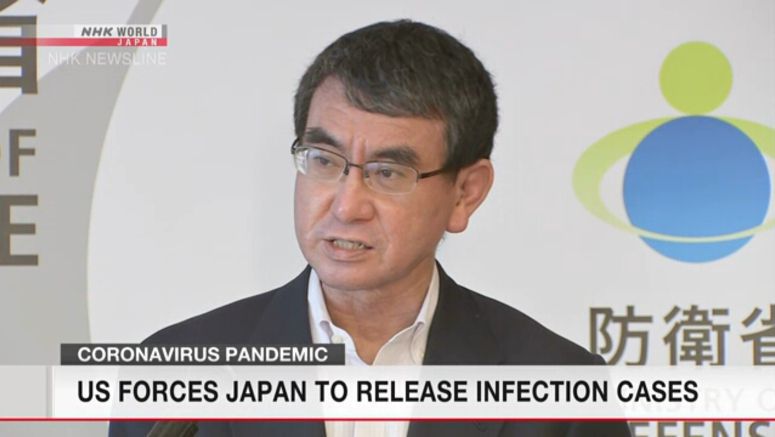 Defense Minister Kono Taro says the US military in Japan will begin releasing details about the number of people infected with the coronavirus at military facilities in the country.

Infection cases have been confirmed among US military personnel in Okinawa Prefecture and elsewhere. But the cases had only been reported to some municipal governments.

Kono told a news conference on Tuesday that US Forces Japan will start to report the infection cases at each military facility in the country.

Kono said the ministry plans to have Japanese workers at US bases, beginning with those in Okinawa, receive PCR tests.

He also said that the ministry has requested that the US conduct PCR tests on all US military personnel entering Japan.

On Tuesday, the USFJ reported on its website that 140 people had been confirmed as being infected with the coronavirus at military facilities in the country as of July 16.

Nearly 90 percent of the cases are in Okinawa Prefecture, including 64 at the US Marine Corps Futenma Air Station and 51 at Camp Hansen.

The USFJ said the infection cases include family members of military personnel.