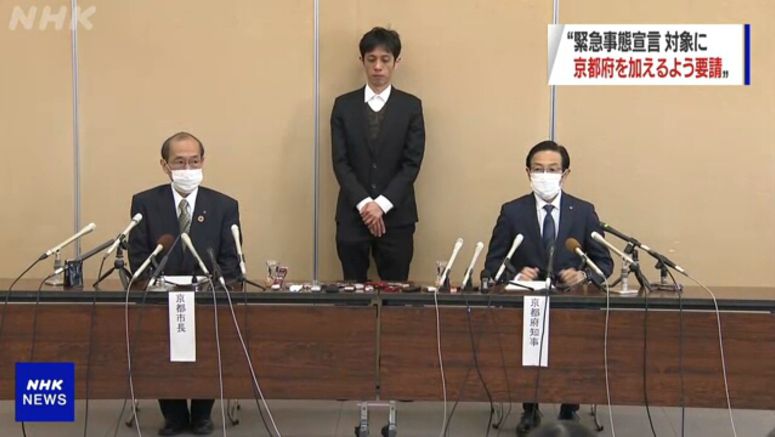 Kyoto Prefecture and Kyoto City in western Japan are to ask the central government to put the prefecture under a state of emergency for the coronavirus pandemic.

Kyoto Governor Nishiwaki Takatoshi and Kyoto City Mayor Kadokawa Daisaku are set to announce their request at a news conference on Friday morning.

Kyoto Prefecture has reported 165 coronavirus cases, the third largest number in the Kansai region after Osaka and Hyogo prefectures.

Osaka and Hyogo were included in the emergency declaration issued by Prime Minister Abe Shinzo on Tuesday.

The governor and the mayor believe that Kyoto residents should exercise more restraint as about 30 percent of the prefecture's confirmed cases, or 47, have unknown infection routes.

They also took into account the fact that many people travel between the prefecture and Osaka and Hyogo.

Aichi Prefecture in central Japan will declare a state of emergency independently on Friday afternoon.

Under the declaration, Aichi residents will be urged to refrain from non-essential outings. The measure will remain in place until May 6.

Aichi Governor Omura Hideaki plans to ask the central government to include his prefecture in the emergency declaration.