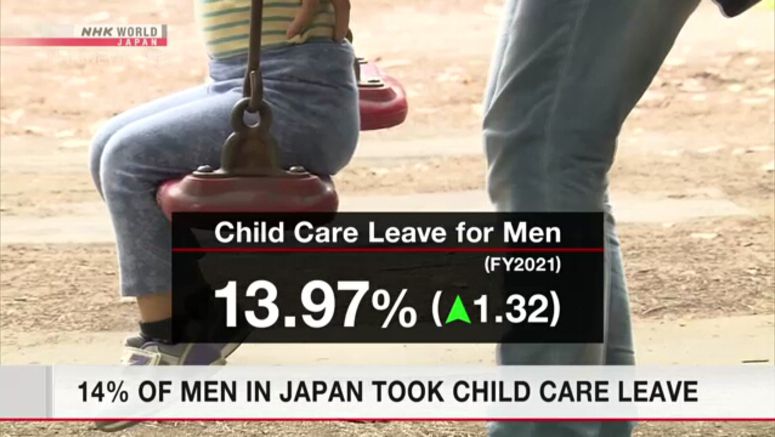 A government survey shows that the proportion of male workers in Japan who take childcare leave hit a record high in the last fiscal year. But it remains uncertain whether the government's target can be achieved by 2025.

The Health, Labor and Welfare Ministry conducted a survey of 6,300 businesses nationwide last October and 3,683 responded.

The results show that 13.97 percent of eligible male workers took parental leave in the fiscal year that ended in March.

The ratio was up 1.32 percentage points from a year earlier. But the increase was smaller than the 5.17 points marked in the previous year.

The survey also showed that leaves are becoming longer. The proportion of those who took leave for less than two weeks declined over the three years since fiscal 2018, while the ratios for two weeks to one month, as well as one to three months, increased.

Labor ministry officials say they are working to create an environment that is supportive for people who want to take childcare leave.

They point out that starting in April, companies are required to inform their employees of the parental leave system and explain cash handouts provided by the government.