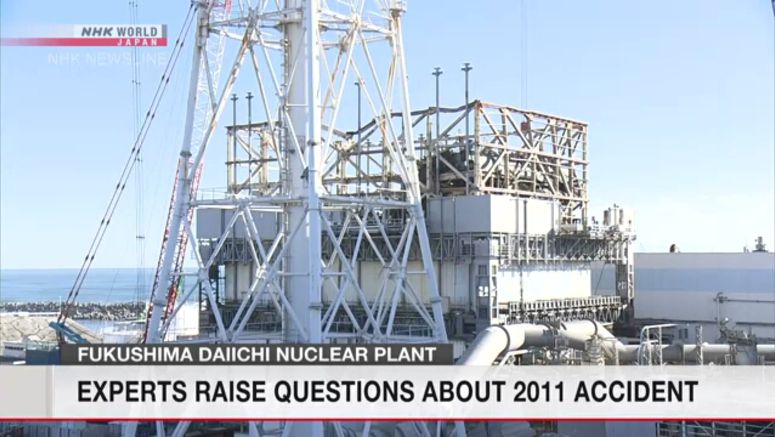 A panel of experts has urged the Japanese government and Tokyo Electric Power Company to seek more information about how the 2011 accident at the Fukushima Daiichi nuclear power plant occurred.

The panel on Monday submitted a report on its investigation into the accident to the governor of Niigata Prefecture, which is adjacent to Fukushima Prefecture and hosts TEPCO's Kashiwazaki-Kariwa nuclear plant.

Three of the Fukushima plant's reactors suffered meltdowns as the loss of power made it impossible to cool them after the massive earthquake and tsunami on March 11, 2011.

TEPCO initially did not use the word "meltdown" for two months after the accident, and also said there was no manual that explains the definition of the word. But it was found later that the manual did exist. TEPCO admitted the cover-up five years after the accident.

The committee also analyzed the cause of the hydrogen explosion that occurred at the Number One reactor. It says bolts on the lid of the reactor vessel may have been loosened by the extreme heat, causing hydrogen gas to leak and trigger an explosion.

TEPCO has not ruled out that possibility.

The panel's report also says it was unable to confirm evidence as to why power was lost at the Number One reactor. It says it cannot rule out the possibility that the reactor lost power due to the impact of the earthquake.

Experts cannot enter some areas of the plant due to high radiation levels, and the panel asks the government and TEPCO to continue efforts to find clues about the cause of the accident as they dismantle the reactors.

Niigata Prefecture plans to use the report as a factor in deciding whether to agree to have the Kashiwazaki-Kariwa plant put back online.