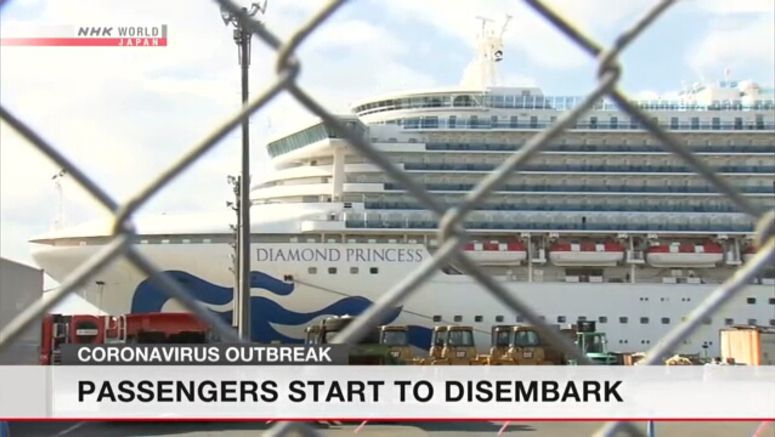 Passengers aboard a cruise ship south of Tokyo have finally started to go home, after spending two weeks in quarantine.

It's been much busier here at Yokohama port than we've seen in recent days. Passengers started disembarking late this morning. They're being ferried to a local train station by bus. Others who are still on the ship have been watching this unfold from their balconies.

About 500 people are expected to be taken off the vessel today.

Officials say all passengers who test negative for the virus and meet a few other conditions should disembark by Friday.

NHK spoke with a few passengers who say they're happy the ordeal is over.

A 71-year-old male passenger said, "It feels like I've been away from Japan for a long time. I just want to go home and eat Japanese food."

An 82-year-old man said, " I was scared every time I heard them announcing more infections. Talking to friends on the phone kept my spirits up."

When the ship arrived earlier this month, it was carrying about 3,700 people. Since then, over 500 infections have been confirmed on board.

The Health Minister says the quarantine was a necessary response to the cruise ship's landing request.

But some foreign experts have criticized the decision to keep everyone on board. One Japanese expert who assessed the ship told NHK that measures to prevent infections fell short. He said crew members weren't doing enough to protect themselves.

Japan's top spokesperson is defending how the government handled the situation.

Chief Cabinet Secretary Yoshihide Suga said, "The government has done its utmost to ensure the health of the passengers and crewmembers by minimizing the risk of infection on the ship. We have carried out tests prioritizing those with symptoms and the elderly and have transferred them to medical facilities when necessary."

Suga added that allowing passengers to disembark was based on an experts' opinion that people should be allowed if they were quarantined, showed no symptoms, and tested negative for the virus.

More and more governments say they will evacuate their citizens after they leave the ship. The US was the first to do so on Monday, followed by South Korea.

But Health Ministry officials say residents of Japan who leave the ship are free to return home. They will be contacted by phone for several days to check on their health.