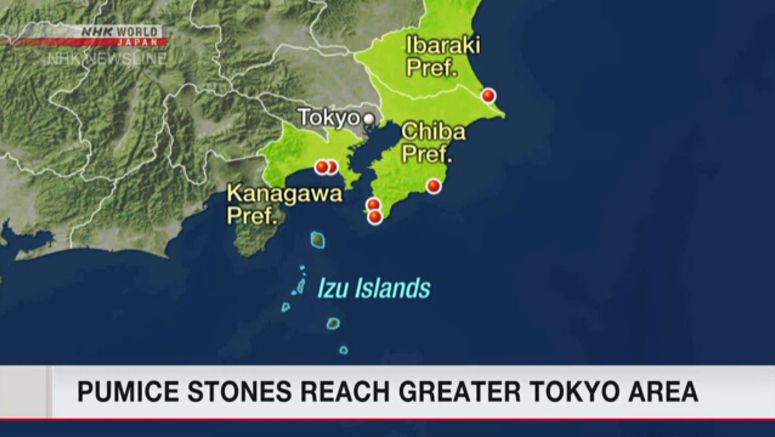 Pumice stones spewed from an undersea volcano are vexing communities and businesses along Japan's Pacific coast.

As many puzzle over how to dispose of them, a team of researchers has come up with an idea that could pave the way for utilizing the nuisance rocks.

Massive amounts of pumice stones have been washing ashore in the country's southwest since last month. They have caused damage to fishery operations and marine transportation.

Some of the stones have been drifting northward. Officials have spotted them along the coastline of the greater Tokyo area.

A cleanup volunteer in Chiba Prefecture, east of Tokyo, said his team spotted the stones for the first time on Wednesday. He said, "I didn't expect them to come here, but they've arrived."

In addition to the cleanup, how to dispose of the pumice is posing a major challenge.

But researchers have now succeeded in an experiment that could make use of it.

They put the stones in a solution of sodium hydroxide.

They sealed the container and heated it to 100 degrees Celsius.

Microscopic images of the heated stones show their surfaces coated with particles of crystalized zeolite.

Zeolite can absorb molecule-sized substances. The researchers hope that pumice stones coated with crystalized zeolite can be used to clean water.

Ono Yosuke of Kanagawa Institute of Industrial Science and Technology said, "The processed stones could be used to treat radioactive water from nuclear power plants as well as red tides. It would be great if our research could be used for new purposes."

Ono said his team will further analyze the data in an effort to put the method to practical use.