Japan Bullet Latest News From Japan About Auto, Technology, Culture, Travel, Cuisine . All you need to know about Japan !
Updated 7:35 PM UTC, Apr 21, 2021
Headlines:
Avante Design Dreams: The design of the current Toyota Supra h
Suga to unveil plan : Japan's Prime Minister Suga Yoshihide ap
Decision on spectato: The head of the Tokyo Olympic and Paraly
Acura Explains The O: Acura is making a big deal out of the re
I bought a '77 Honda: Though nostalgia fuels many vintage vehi
Japan preparing for : The Japanese government is considering d
Osaka: Record 1,242 : The government of Osaka Prefecture in we
Tokyo, central govt.: The Tokyo Metropolitan government is in
Tokyo confirms 843 n: Tokyo Metropolitan Government officials
Japan, Philippines d: The foreign ministers of Japan and the P 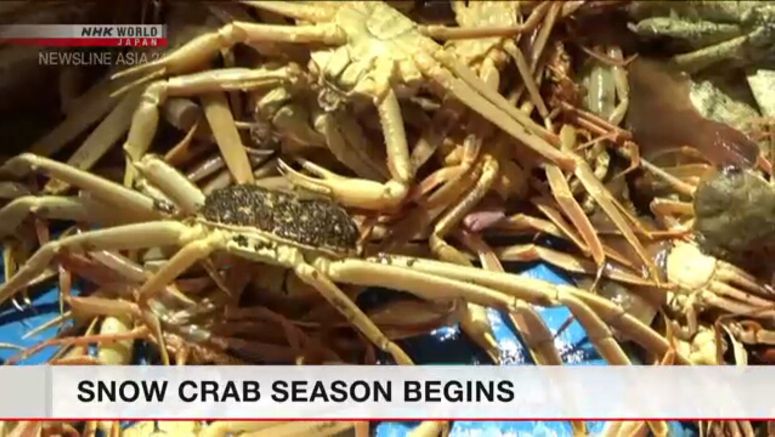 The fishing season for snow crabs began on Friday in the Sea of Japan off Fukui Prefecture.

Boats carrying the renowned winter delicacy unloaded their haul at ports in the prefecture.

Around 50 fishing boats set out from Echizen port in Fukui Prefecture just after 10 p.m. on the previous night.

Fishermen aboard the Itoku-maru started placing nets in the water the moment the clock struck midnight. When the nets were hauled in about 90 minutes later, a large pile of snow crabs formed on the deck. Some of the crabs had shells as large as 15 centimeters wide.

The ship's captain said the catch was better than the first haul last year. He is hoping for a bumper catch.

Amid concern that the coronavirus outbreak could hamper demand and lower prices, the Fukui prefectural government plans to help retailers offer a discount of 3,000 yen, or around 30 dollars, for anyone who purchases a gift package worth about 190 dollars or more.

The fishing season runs through March next year for male crabs and until the end of this year for female ones.

The design of the current Toyota Supra hasn't won everyone over. Avante Design decided to add a dose of aggression to the Japanese sports car by dreaming up a bodykit, which only exists in renders, at least for now.

Japan's Prime Minister Suga Yoshihide appears set to unveil the government's greenhouse gas reduction target for 2030 at an online climate change summit organized by the United States.Hosted by US President Joe Biden, the two-day meeting, which starts on Thursday, is expected to bring together...more

The head of the Tokyo Olympic and Paralympic Games organizing committee has indicated the decision on limits for domestic spectators at the Tokyo Games will likely be put off for the time being.Hashimoto Seiko expressed the view to reporters that "a little more time may be needed" after taking part...more

Acura Explains The Origin Story Of The Type S Badge

Acura is making a big deal out of the return of the Type S badge, but that might leave some people curious as to what exactly the badge means. Fortunately, Acura has taken the time to shoot a video about the history of the moniker.

Though nostalgia fuels many vintage vehicle purchases, and though I have more than my share of vintage vehicles, I've never re-bought a car identical to one I or a family member owned in my youth. Until now.Last month, I purchased a pristine, 61,000-mile, Nice Blue Metallic 1977 Honda Accord...more

The Japanese government is considering declaring a state of emergency in two of the country's major urban centers to curb a spike in coronavirus cases.Infections are increasing around Osaka and Tokyo. Experts say more contagious variants are largely to blame.

The government of Osaka Prefecture in western Japan reported 1,242 new cases of coronavirus infections on Wednesday.This marks the highest daily count for Osaka Prefecture, surpassing the previous record of 1,219 on Sunday. The Osaka daily tally has topped 1,000 for the eighth time.

The Tokyo Metropolitan government is in talks with the central government on matters regarding a state of emergency it is seeking for Tokyo amid a coronavirus resurgence.Governor Koike Yuriko told reporters on Wednesday that working-level talks are focusing on the duration of the state of emergency...more

Tokyo Metropolitan Government officials confirmed 843 new cases of the coronavirus in the capital on Wednesday.This is the highest daily count since the second state of emergency was lifted last month, and the first time since January 29 that the figure surpassed 800.

The foreign ministers of Japan and the Philippines have discussed the serious concerns they share about China's unilateral attempts to change the status quo by force in the East and South China seas.Japanese Foreign Minister Motegi Toshimitsu and his Philippine counterpart Teodoro Locsin spoke by...more