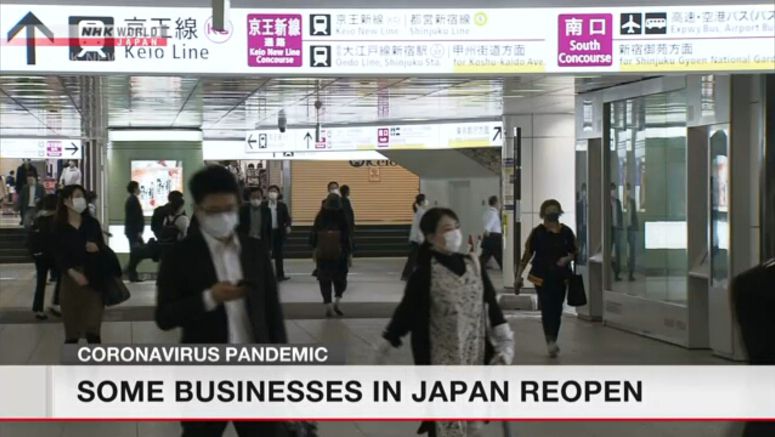 Some prefectures in Japan are resuming business as the government mulls lifting the state of emergency due to the coronavirus before the end of the month.

More than 30 prefectures are expected to have restrictions eased while Tokyo is likely to stay under the emergency declaration.

In Tokyo's central district Shinjuku, the number of people commuting to work appears to be increasing after the spring holidays.

The state of emergency came into effect for Tokyo and six other prefectures on April 7. The government since extended it nationwide.

On Monday morning, streets near Shinjuku station -- one of the busiest in the world -- had more people than in recent days.

One commuter said, "I go to work as usual. Due to the nature of my work, I have to meet with clients. So it's hard for me to work from home."

The government plans to discuss lifting the state of emergency for certain prefectures at a meeting of its experts panel on Thursday.

One of the expected criteria will be whether places are seeing a decline in weekly new cases in proportion to regional population.

In Fukui prefecture, central Japan, no new cases have been reported for more than 10 days as of Sunday.

An aquarium has reopened after about a month.

But the number of visitors are restricted, and social distances are required due to safety concerns.

A woman said, "As there are not many places for small kids to go out, we came here today for the first time in a while."