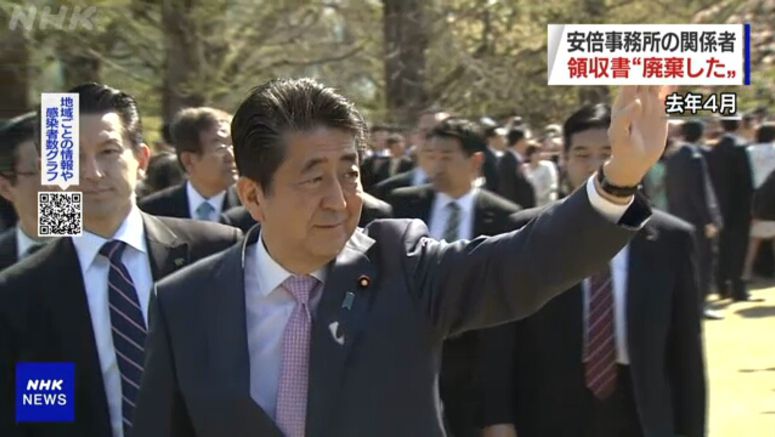 NHK has learned that staff at the office of former Prime Minister Abe Shinzo had disposed of receipts from hotels where annual parties were held for his supporters.

Each party was held on the eve of Abe's annual cherry blossom viewing event.

Receipts from the hotels suggest Abe's office paid at least about 77,000 dollars of the total costs for the parties between 2015 and 2019. The receipts were issued to a fund management group headed by Abe.

The new revelations contradict Abe's repeated explanations in the Diet that all of the parties' expenses were covered by the participants.

Sources with knowledge of the matter say staff from Abe's office told others that the receipts were discarded.

On Tuesday, sources close to Abe admitted that the office shouldered part of the costs for the parties.

They revealed that the office did not report income and expenses when the party was held for the first time in 2013. They said that as a result, staff put Abe in the position of giving statements contrary to the facts in response to questions in the Diet.

Lawyers and others across Japan have filed criminal complaints on suspicion that Abe's office violated the political funds control law.