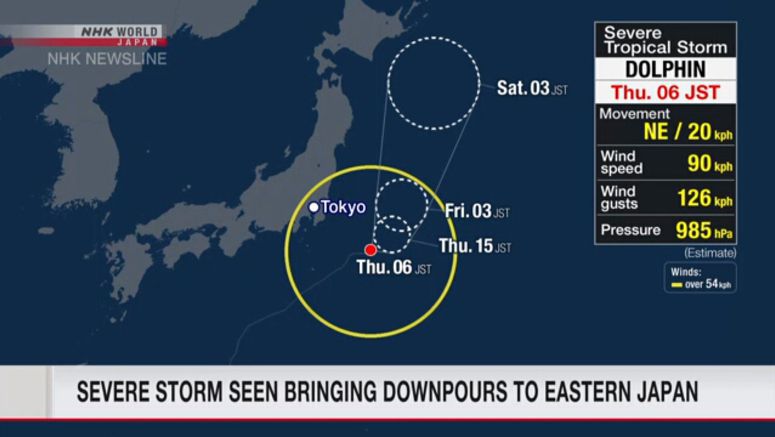 Severe Tropical Storm Dolphin could bring downpours to the eastern part of the country through Saturday. Weather officials are urging people to stay alert for possible mudslides and flooding and low-lying areas, as well as wind gusts and high waves.

The Meteorological Agency says the storm was 270 kilometers southeast of the port city of Choshi in Chiba Prefecture neighboring Tokyo as of 6 a.m. Thursday, Japan time. It was moving northeast at a speed of about 20 kilometers per hour.

The storm has a central atmospheric pressure of 985 hectopascals and is packing maximum winds of 90 kilometers per hour.

The Pacific coast of Tohoku can expect heavy rain.

Up to 100 millimeters of rain may fall in some parts of Tohoku and 80 millimeters in Kanto during the 24 hours ending Friday morning.

As the storm took a more easterly course than predicted, chances of downpours in Kanto have somewhat diminished.

Wind is expected to intensify in these areas through Friday. Maximum winds of over 80 kilometers an hour are expected along the Pacific in Kanto and Hokkaido, and over 70 in the Izu Islands and in Tohoku.

The Pacific coast of Tohoku and Hokkaido could have maximum winds of 72 to 86 kilometers per hour on Saturday.

Seas will be rough, with high waves of 7 meters likely to occur off the coasts of Kanto and Tohoku till Friday.