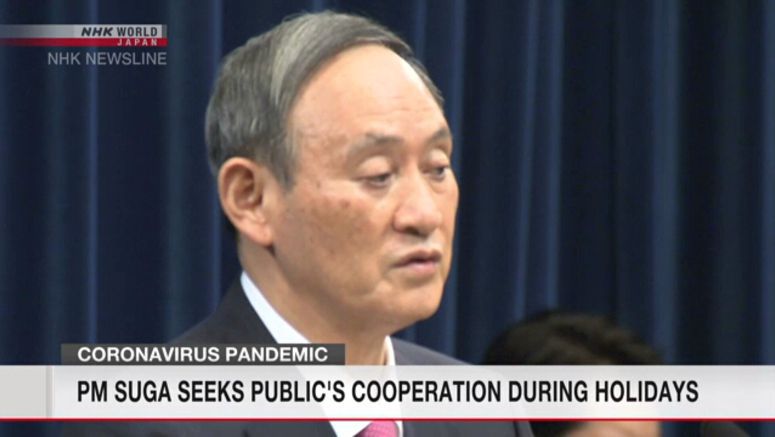 Japan's prime minister said his administration will consider revising the law so that subsidies and penalties can be used in combination to enforce shorter business hours at bars and restaurants.

Suga Yoshihide mentioned the plan at a news conference on Friday. He called on people to avoid gatherings during year-end and New Year holidays to contain a surge in coronavirus cases.

Suga said infections are spreading mainly in the Tokyo Metropolitan area, with the nationwide toll surpassing 3,000 on a daily basis.

Noting that foot traffic in Tokyo has barely gone down, he said a further rise in infections would be inevitable unless changes take place.

Suga said the holidays offer a chance for friends and families to meet. But he urged the public to cooperate and avoid gatherings as much as possible.

The prime minister said experts have consistently pointed to the infection risks of dining out, and that shortening the business hours of bars and restaurants is said to be the most effective countermeasure.

Suga said the government will consider revising the special measures law covering the coronavirus, so that subsidies would be paid to businesses that comply with requests for shorter hours. Those that refuse would face penalties.

Suga also noted that a panel of experts advising his government is divided between those who support penalties and others who are cautious about limiting the rights of private companies. He said he will ask the panel to promptly study the issue.