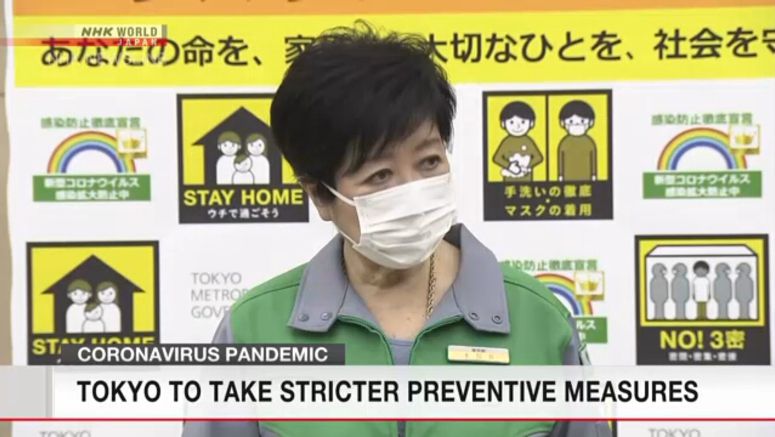 Stricter measures against coronavirus are returning to Tokyo as a surge in new cases follows the lifting of a state of emergency last month.

Tokyo Governor Koike Yuriko said, "From the viewpoint of crisis management, we have asked the central government to designate Tokyo as an area where strict measures should be taken."

He said, "We have decided to ask an expert advisory panel to discuss the request from the Tokyo government tomorrow."

Health authorities confirmed 545 new infections in the capital on Thursday. This is the first time the daily tally has topped 500 for two days in a row since the state of emergency was lifted last month.

Officials now plan to urge bars and restaurants in certain areas to close earlier. They are also asking residents to refrain from unnecessary travel outside the prefecture.

Experts monitoring the situation in Tokyo are concerned about a more infectious variant.

They say about a third of 158 positive samples taken recently had N501Y mutations. The strain was first detected in the UK, and had spread mainly in western Japan.

Yoshimura Kazuhisa at Tokyo Metropolitan Institute of Public Health said, "The ratio of N501Y has sharply increased over the past week. I believe the variant is currently a bigger threat."

The western prefecture of Osaka, its neighbor Hyogo, and Miyagi Prefecture in the northeast started more stringent anti-virus measures on Monday.

Osaka officials reported 905 cases on Thursday, the third consecutive day a record was reached. More than 70 percent of hospital beds for serious COVID-19 patients there are occupied.

Osaka Governor Yoshimura Hirofumi said, "We need to curb the number of infections as much as possible to ease the strain on the medical system."

Governors in Kyoto and Okinawa are also planning to seek the same designation.

The prime minister says the government will work closely with local officials and consider where stricter measures are needed.

Across Japan, more than 3,400 coronavirus cases were reported on Thursday.