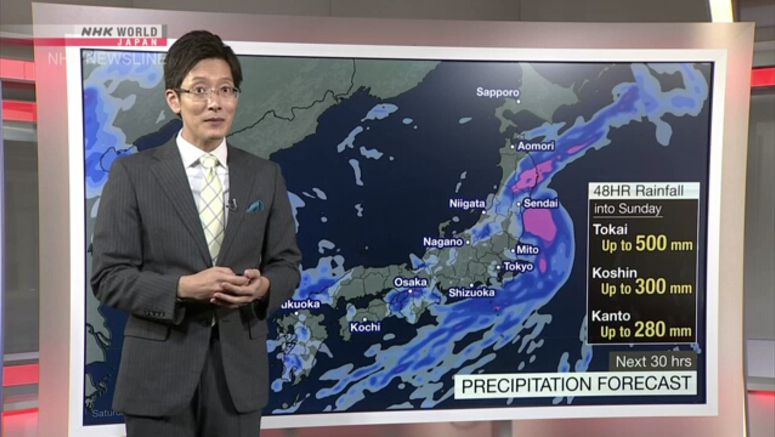 Japan's weather officials say Tropical Storm Meari will likely make landfall on the central region of Tokai or the Kanto region, which includes Tokyo, on Saturday.

The officials say that bands of active rain clouds may hit Shizuoka and other prefectures in the Tokai region, raising the risk for disasters.

Tokai, Kanto and Koshin regions have already had heavy rain of more than 50 millimeters per hour. More rainfall is forecast over the weekend.

In the 24 hours through Saturday evening, up to 300 millimeters of rain is expected in Shizuoka, and 200 millimeters in Kanto-Koshin.

The officials say the storm will likely strengthen winds and whip up waves as it approaches Japan.

The Izu Islands, south of central Tokyo, and the regions of Kanto and Tokai are expected to have maximum winds of about 72 kilometers per hour.

All Nippon Airways says it has already cancelled 10 flights scheduled to depart from or arrive at Shizuoka and Hachijo Island for Saturday. The airline also says it may cancel those to and from Tokyo's Haneda Airport.

Some train services in Chiba Prefecture, east of Tokyo, will be suspended on Saturday.