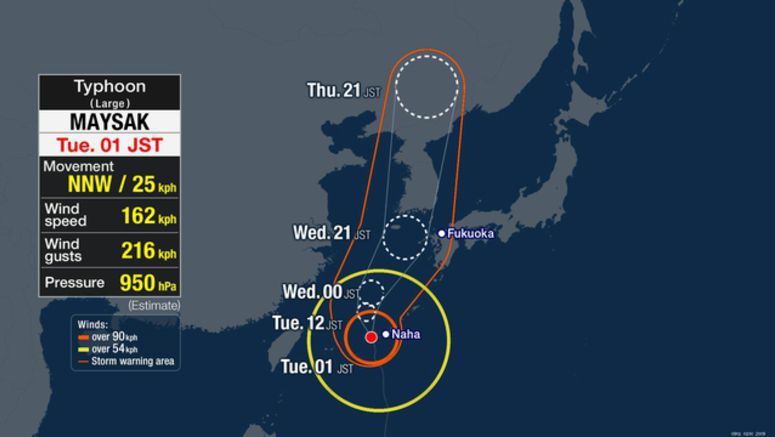 Powerful Typhoon Maysak is moving through the islands of Okinawa, southern Japan. It is expected to approach Okinawa's main island by Tuesday morning and move over waters west of Kyushu region through Thursday.

Weather officials say that as of midnight on Tuesday, the large and very strong typhoon was moving north-north-west over waters 80 kilometers south of Okinawa's Kume island at a speed of 25 kilometers per hour.

Violent winds of more than 90 kilometers per hour are blowing within 185 kilometers of its center.

Winds strong enough to cause houses to collapse are expected in Okinawa on Tuesday morning.

Rough seas are also expected. Waves are likely to reach 13 meters high around Okinawa, and 10 meters in height around Amami.

Okinawa is forecast to have hourly rainfall of 80 millimeters or more, accompanied by thunder.

The approaching typhoon could cause a record high tide in Okinawa and may cause flooding in coastal areas and near the mouths of rivers.

People are advised to stay updated on the latest information.