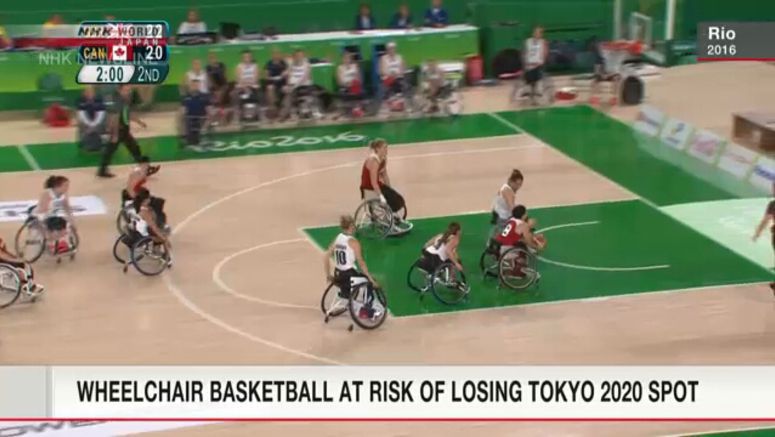 The organizers of the Tokyo Paralympic Games say they will sell tickets for wheelchair basketball as planned despite a warning by the International Paralympic Committee that the sport could be removed from the Tokyo Games.

The IPC issued the warning on Friday, saying that the International Wheelchair Basketball Federation has failed to comply with the IPC athlete classification code.

The IPC warned the federation that removal from the Tokyo Games is one of the options it could pursue unless the federation improves athlete classification by May 29.

Men's and women's wheelchair basketball matches are scheduled to start on August 26.

The first lottery for Paralympic tickets has been completed and results of the second lottery will be announced on February 18.

The organizing committee has received a number of applications for tickets for the wheelchair basketball events.

The committee says that since the sport has not been removed from the games yet, it will begin over-the-counter ticket sales in spring as planned.

The committee also says a lot of people are looking forward to watching the sport and it hopes the international wheelchair basketball federation will make improvements quickly.

The federation has said that it will do everything in its power to respond to the IPC warning.

Survey: 65% of Olympic sponsors unsure about ...

Japanese Prime Minister Abe Shinzo says there is no need to declare a state of emergency again despite rising numbers of coronavirus infections.Abe met Economic Revitalization Minister Nishimura Yasutoshi, who's in charge of the response to the national coronavirus and Health Minister Kato...more

The governor of Kumamoto Prefecture in southern Japan says 14 people have been found without vital signs at a nursing home for the elderly. That comes amid heavy flooding in the region.

Torrential rains have battered parts of southern Japan. Flooding is causing havoc in many residential areas.Authorities say over 10 people have been found with no vital signs while others are missing.

Torrential rains that lashed southern Japan on Saturday began to ease in the afternoon, prompting authorities to change a heavy rain 'emergency warning' for Kumamoto and Kagoshima prefectures to a 'warning'.Flooding continues to cause havoc in many residential areas, and Nakamoto Yoshihisa, Japan's...more

Tokyo metropolitan government sources say 131 new coronavirus cases were confirmed on Saturday. That's the highest since the state of emergency was lifted on May 25.Tokyo's daily tally of new cases surpassed 100 for the third consecutive day, bringing the total of those who have tested positive in...more