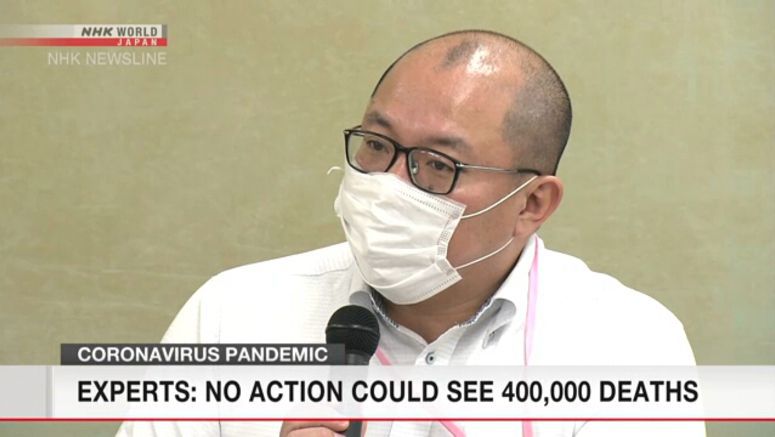 A team of experts in Japan says more than 400,000 people would die from the new coronavirus nationwide if no measures are taken to contain infections.

The health ministry set up the team to help halt the spread of the virus. They reported their estimate on Wednesday.

An evacuation order is in place for more than 2,000 people in the city of Ichihara in Chiba Prefecture due to the typhoon.

Evacuation advisories have been issued for more than 400,000 people in Shizuoka Prefecture and the Tokyo metropolitan area.

Evacuation orders have been issued for more than 400,000 people in Saga, Fukuoka, Nagasaki and Yamaguchi Prefectures.

The evacuation orders are level four alerts on a scale of five.

Nissan said Tuesday that the Leaf surpassed 400,000 sales, making it the first electric vehicle to hit that sales plateau. Of course, it's also had a hefty head start over its closest competitors, the Tesla Model 3 and the Chevrolet Bolt, having first gone on sale in late 2010, and it has a few other advantages as well. Not to rain on the Leaf parade or anything.

Now in its second generation and sporting improved driving ranges, Nissan says Leaf owners have driven their cars more than 6.2 billion collective miles, equating to an estimated savings of 3.8 million barrels of oil per year. The battery-powered hatchback is now available in more than 50 markets across the world, with six new markets coming on board during the first half of 2019 in Latin America, and seven across Asia and Oceania by year's end. The Leaf was the best-selling EV in Europe in 2018 and the top-selling vehicle of any kind in Norway last year, Nissan says.

A initiative from Ricoh to salvage, clean, scan and return photographic prints found in the areas devastated by the March 2011 Great East Japan Earthquake and Tsunami has reunited over 90,000 images with their rightful owners since it began shortly after the disaster struck. The Save The Memory Project has recovered over 400,000 prints from the rubble of affected areas, has cleaned and scanned them and posted digitized versions on an online system for owners to claim.

Romance is in the night air as couples turn out in force for the illumination of 400,000 blue light-emitting diodes placed on cherry trees that line the banks of the Meguro river in Tokyo’s Meguro Ward.

Masamichi Kogai was appointed president of Mazda on June 25 of this year, being in complete control of a company which he also guided as CEO right after the world financial crisis struck, from around the end of 2008.

Through a $400,000 kick-start grant, Nissan is working with United Way of the Capital Area to provide free books every month to 35,000 eligible Mississippi preschoolers from birth to age 5 through the Dolly Parton Imagination Library program.