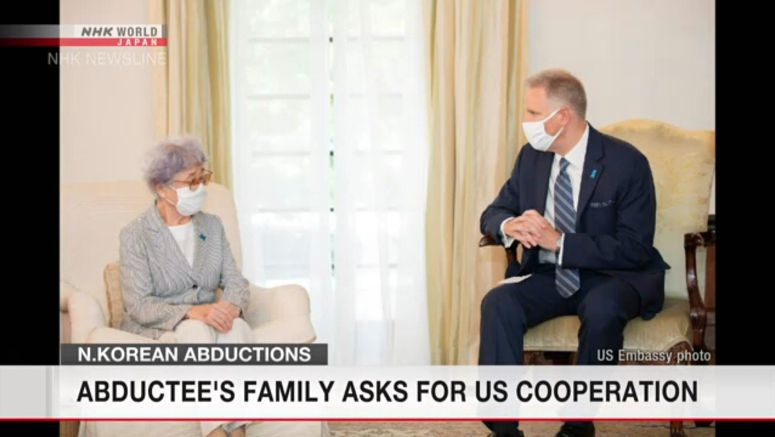 Members of the family of a Japanese woman abducted by North Korea have met a top official at the US Embassy in Tokyo and asked for cooperation toward a return of Japanese nationals abducted by the North.

Yokota Megumi was abducted in 1977 on her way home from junior high school in Niigata City, on the Sea of Japan coast.

Japan's foreign minister has asked his Mongolian counterpart for help in resolving the issue of Japanese nationals kidnapped by North Korea.

US President Donald Trump has pledged his full support to help bring back Japanese nationals abducted by North Korea.

Trump is on a four-day state visit to Japan. Along with Prime Minister Shinzo Abe, he met the families of victims on Monday.

Chief Cabinet Secretary Yoshihide Suga says he confirmed during his recent trip to the United States the US government's support for Japanese efforts to bring home its nationals abducted by North Korea.

Suga made the comment on Wednesday at a meeting of the main governing Liberal Democratic Party's taskforce on the abduction issue. Suga is also the minister in charge of this issue.

Abe met the head of a task force of his Liberal Democratic Party in charge of the abduction issue, Eriko Yamatani, on Thursday.

Japan's Prime Minister says US President Donald Trump has promised to cooperate fully with Japan on the issue of Japanese nationals abducted by North Korea.

He also said they agreed to accelerate negotiations for a new trade deal.

A senior official from Japan's Foreign Ministry says US President Donald Trump and North Korean leader Kim Jong Un discussed the abductions of Japanese nationals by the North. Prime Minister Shinzo Abe has stressed that resolving the issue remains one of his government's top priorities.

During his news conference, Trump said South Korea's President Moon Jae-in and Abe would be among his first calls to explain the results of the two-day summit.

A Japanese government-sponsored symposium was held in Tokyo to discuss international cooperation on resolving the North Korean abduction issue.

Fred Warmbier, father of former US college student Otto Warmbier, who died after being detained by North Korea for more than a year, took part in the event.

The mother of high-profile abductee Megumi Yokota has called on the Japanese government to take steps that will lead to return of all those kidnapped. Thursday is the 41st year to the day since her abduction to North Korea.

NHK has interviewed Sakie Yokota in this connection.

Abe was speaking at a meeting with former abductee Hitomi Soga, whose mother is still unaccounted for after the two were abducted by North Korean agents decades ago.

Japan's Prime Minister Shinzo Abe has expressed willingness to talk directly with North Korea, but stressed that doing so must help resolve the issue of Japanese abducted by the country.

Abe was speaking to a nonpartisan group of lawmakers that submitted recommendations on the abduction issue after the June 12th summit between the United States and North Korea.

A Japanese man who was previously kidnapped and taken to North Korea says the abduction issue is coming to a crucial stage, following the June 12th US-North Korea summit.

Kaoru Hasuike delivered a speech in the Japanese city of Akita on Saturday. He was kidnapped and taken to the North in 1978, and returned home 24 years later, following the Japan-North Korea summit in 2002.

Abe was speaking to members of his ruling Liberal Democratic Party on Monday evening.

The Tokyo metropolitan government lit up its building in blue Wednesday to raise public awareness of the issue of North Korean abductions of Japanese nationals in the 1970s and 1980s.

In Japan, blue ribbons symbolize the campaign of relatives and supporters seeking the return of Japanese abductees.