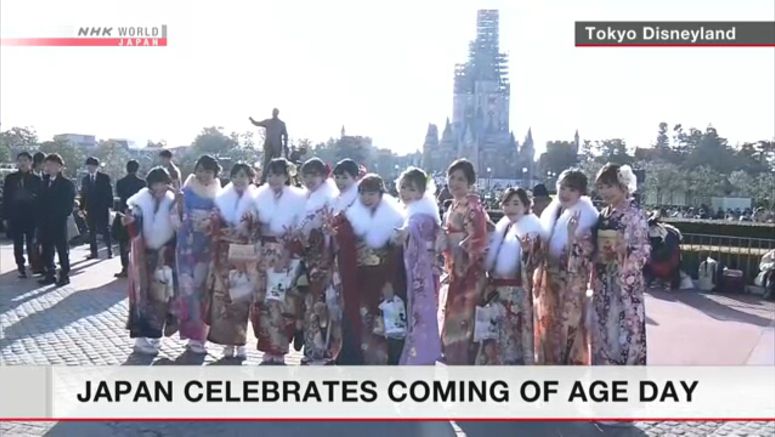 Young people in the Japanese city of Osaka have marked a rite of passage by climbing steps to the top of the country's tallest building.

Monday is Coming of Age Day, a national holiday that honors people reaching age 20, the legal start of adulthood in Japan.

The organizer of the Tokyo 2020 Paralympic Games says Paralympic flame-lighting events will be held in hundreds of municipalities across Japan.

The organizing committee unveiled on Friday the schedule for the flame-lighting events and torch relays.

Weather officials in Japan are predicting heavy rain for many parts of the country, including areas that were hit by Typhoon Hagibis earlier this month.

In Muroto City in Kochi Prefecture, western Japan, 33 millimeters of rain fell in the hour before noon on Thursday.

Hagibis has caused death and destruction throughout Japan. Four people have died, 17 people remain missing, and more than 100 people were injured.

In Nagano Prefecture, three cars were washed away by flood waters near the Chikuma River. Three people have been rescued but three others remain missing.

Widespread flooding has been recorded in central and eastern Japan after Typhoon Hagibis ripped through the main island of Honshu. Hagibis has since been downgraded to a severe tropical storm.

Typhoon Hagibis has caused death and destruction across Japan. Three people have died, one other was found without vital signs, 17 people remain missing, and more than 90 people were injured.

In Nagano Prefecture, three cars were washed away by flood waters near the Chikuma River. Three people have been rescued but three others remain missing.

Typhoon Hagibis has dumped a record amount of rain on many parts of central and eastern Japan.

At least seven rivers in those regions are flooding their banks. The Meteorological Agency has lifted its top heavy rainfall emergency warning for Tokyo, but warnings for nine prefectures remain in place.

Typhoon Hagibis is causing injuries and damage throughout Japan.

Hagibis has already caused rivers to overflow in Shizuoka Prefecture...and inundated many roads.

The Meteorological Agency estimates that as of 7 p.m. on Sunday, Tapah is over waters 80 kilometers north of Goto city, Nagasaki Prefecture. The storm was moving north-northeast at 30 kilometers per hour.

Hundreds of thousands of homes in Japan are still suffering from power blackouts, four days after Monday's typhoon.

Tokyo Electric Power Company says the cities of Chiba, Yachiyo, Yotsukaido and Inzai and parts of Ichihara will have power restored by the end of Thursday.

Weather officials are warning of heavy rains across much of Japan, mainly in northern Kyushu, through Thursday.

The Meteorological Agency is urging people to watch out for mudslides and river flooding.

Nissan and EVgo are expanding their charging network by adding 200 new fast chargers across the United States. All of the new chargers are capable of delivering 100kW and feature both CHAdeMO and CCS connectors, making them available to a wider portion of electric vehicles.

A bizarre police chase occurred in Playa Del Rey, Los Angeles last week that saw the suspect drive along a beach and try to flee authorities by jumping into the ocean.

Groups of lawyers and voters have filed lawsuits across Japan, demanding that the results of Sunday's Upper House election be nullified due to disparities in the value of votes.

One of the groups filed a suit with the Tokyo High Court on Monday afternoon.