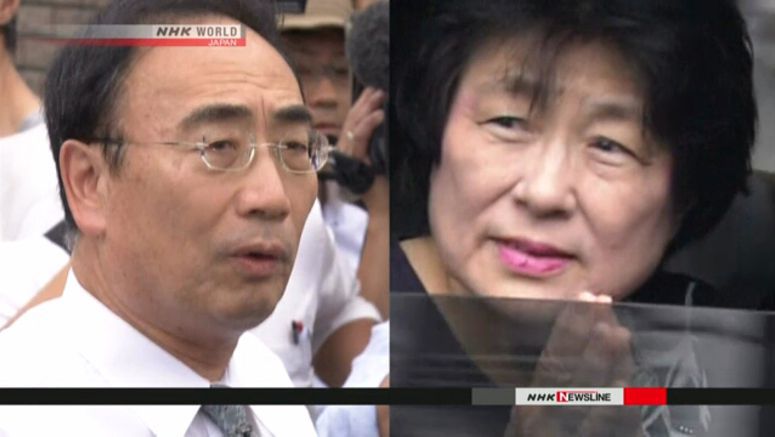 A court in Osaka has found a former school operator and his wife guilty of defrauding the central and local governments of school-related subsidies.

The former president of Moritomo Gakuen, Yasunori Kagoike, and his wife Junko were charged with defrauding the central government, Osaka Prefecture and Osaka City of some 170 million yen, or about 1.5 million dollars.

Japan's Foreign Ministry says the new head of the International Atomic Energy Agency will visit the country next week.

IAEA Director General Rafael Grossi will visit Japan from Monday to Friday. This will be his first visit to Japan since he took office in December following the death of his predecessor Yukiya Amano from Japan.

A funeral for former UN High Commissioner for Refugees Sadako Ogata has been held at a church in Tokyo.

Relatives, friends and others paid their final respects on Tuesday to the first Japanese chief of the UN organization. They included Empress Emerita Michiko, who shares Ogata's alma mater.

Some 700,000 Rohingya have fled to neighboring Bangladesh since Myanmar's security forces launched a massive sweep operation against Rohingya militants in 2017.

Details about the second generation of the Toyota 86 are sketchy at best, but according to the automaker’s chief engineer Tetsuya Tada, who led the development of both the 86 and the A90 Supra, the next-gen compact sports car will be even better than the original.

Japan and South Korea have held diplomatic bureau chief-level talks in Japan in an attempt to ease strained bilateral relations.

The head of the International Paralympic Committee has dismissed South Korea's claim that the medals for the 2020 Tokyo Paralympics should be changed because their design allegedly resembles the "Rising Sun" flag.

IPC President Andrew Parsons spoke with reporters on Thursday after meeting in Tokyo with delegates of the nations and territories that will take part in the games.

Bank of Japan Governor Haruhiko Kuroda has held a meeting with Prime Minister Shinzo Abe to discuss the global economy and financial markets.

Kuroda visited the prime minister's office on Thursday and talked with Abe for about 40 minutes.

Guterres sat down for an exclusive interview with NHK on Thursday in Yokohama, where he attended a meeting of the Tokyo International Conference on African Development, or TICAD.

Iwaya told reporters on Tuesday that his ministry arrived at the judgment after comparing the launches to other missiles and projectiles North Korea has fired in the past.

Significant changes continue to take place at Nissan in general and Infiniti in particular.

The cubicles and corner offices at Infiniti HQ in Japan continue to change hands. Infiniti Global Design Chief Karim Habib, only in that position for about two years since leaving BMW in 2017, has left the Japanese luxury brand "to pursue other opportunities." In his place, Nissan has elevated Taisuke Nakamura, a 26-year company veteran who is currently Nissan's program design director responsible for global design strategy, and concept car and production vehicle design. Nakamura has a stout design résumé in service to both Nissan and Infiniti, having worked on the Qs Inspiration sedan concept (above) shown at the Shanghai Motor Show in April, the QX Inspiration crossover concept shown at the Detroit Auto Show this year (below), and the Prototype 10 speedster concept revealed at Pebble Beach last year (bottom). All of those were electric concepts, making Nakamura the point man for Infiniti's push into electric vehicles and hybrids, and the carmaker's introduction of a new design language. Last year, Infiniti said it would have a new EV on the market in 2021, as well as "e-Power" series hybrids with small battery packs charged by gas-powered generators.   Those EVs should fully embody the brand's new design DNA, seen initially in the recent concepts. The automaker said around the Qs reveal that the new "aesthetics are underpinned by Infiniti's desire to challenge convention and design cars which are engaging, enriching, enabling and enchanting – what the company calls its ‘4EN' approach to design." At the QX reveal in January, Habib said that as engineers made a "shift towards smarter, more compact and less intrusive powertrains, we were able to create an alternative form with flowing gestures, more engaging in character and more enriching in experience. With its long cabin, balanced proportions and muscular stance, the concept heralds in a new era for Infiniti models." Infiniti said Nakamura takes up his post next week, Sept. 1, and will report to the same boss he has now, Alfonso Albaisa, Nissan's global design head. Aside from Habib, other top non-Japanese Nissan executives such as Daniele Schillaci, Jose Munoz and Trevor Mann have left the Japanese automaker in the recent past, since the arrest of Carlos Ghosn. The former chairman, who faces charges of fraud and misconduct, is awaiting trial in Japan over charges including enriching himself at a cost of $5 million to Nissan, Japan's No. 2 automaker. Information from Reuters was used in this report.

Japan's health ministry says a third passenger from the quarantined Diamond Princess has died. The cause of death was pneumonia.The ministry did not disclose whether the man in his 80s had been infected with the new coronavirus.

Japanese authorities say 57 more people on board the quarantined Diamond Princess have tested positive for the new coronavirus.This brings the total number of virus carriers found on the cruise ship to 691.

Japanese Prime Minister Shinzo Abe has ordered a government task force to prepare for a potential surge in the number of people infected with the new coronavirus.Abe told the task force on Sunday that the situation has entered a crucial phase after cases with unknown infection routes were reported...more