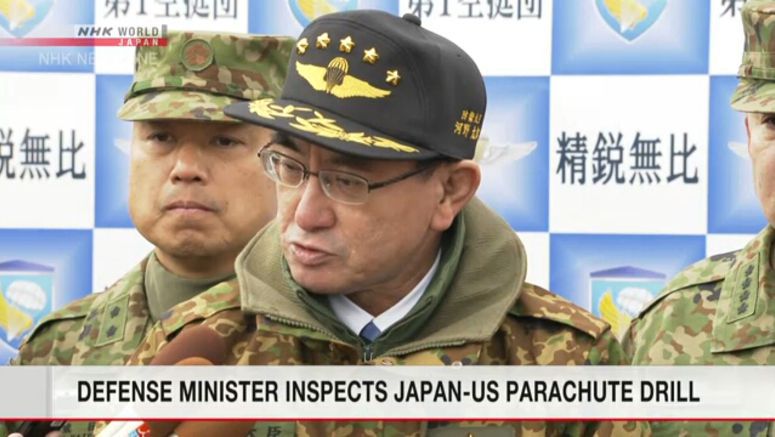 Japanese Defense Minister Taro Kono has inspected a parachute drill by the Ground Self-Defense Force and the US military. The exercise is aimed at preparing for a possible attack on Japan's remote islands.

Kono visited Camp Narashino near Tokyo where the SDF's only parachute unit, the 1st Airborne Brigade, conducted this year's first exercise on Sunday.

A regional coast guard in Japan says its South Korean counterpart has asked to cancel a joint drill for maritime accidents.

The 8th Regional Coast Guard Headquarters in Maizuru City, Kyoto Prefecture, revealed on Friday that the joint exercise scheduled for next Wednesday will not take place. The coast guard said it received the request on Wednesday .

Japanese ministers and government officials have taken part in a drill simulating an accident at a nuclear power plant caused by a massive earthquake.

Prime Minister Shinzo Abe and some of his ministers gathered at his office on Saturday for the exercise, which was based on a scenario involving the No. 2 reactor at the Shimane nuclear power plant in western Japan.

Japan's Air Self-Defense Force has staged a drill involving a PAC3 missile interceptor at a public park in Tokyo.

The drill started at around 8:00 a.m. on Wednesday. Fifteen vehicles carrying launchers and radar equipment were deployed to a park in the Ariake waterfront district.

Japan's Air Self-Defense Force plans to stage a drill involving a PAC3 missile interceptor at a public park in Tokyo early next month.

ASDF officials say 15 vehicles carrying launchers and radar equipment will be deployed at a park in the Ariake waterfront district on October 9.

A Japan Maritime Self-Defense Force destroyer has conducted a joint exercise with the Malaysian navy.

The Asagiri made a port call at Kuantan in eastern Malaysia on Wednesday. The vessel was on its way home after completing a counter-piracy mission off Somalia.

Japanese officials are training to tackle a possible outbreak of mosquito-borne viral infections, ahead of the 2020 Tokyo Olympics and Paralympics.

About 160 officials from the Tokyo Metropolitan Government, the Environment Ministry and other bodies took part in a drill on Monday in Shinjuku Gyoen National Garden in central Tokyo.

A large-scale anti-terrorism drill was held in Tokyo on Monday as part of preparations for the 2020 Olympic and Paralympic Games.

It was held near Harumi Pier in the Tokyo Bay area -- the site of the athletes' village and many events.

A Japanese Maritime Self-Defense Force destroyer has made a port call in Vladivostok for joint drills with the Russian Navy.

The exercise has been held since 1998. Japan and Russia take turns as host.

The Russian Defense Ministry's newspaper says the military fired new surface-to-ship missiles in a drill last autumn on one of the four Russian-controlled islands that Japan claims.

Krasnaya Zvezda reported on Wednesday that a missile unit belonging to the Russian Pacific Fleet conducted the exercise on Etorofu Island with the Bal system.

A counterterrorism drill with an emphasis on providing guidance in foreign languages has been held at Tokyo's Haneda airport in the lead up to the Tokyo Olympic and Paralympic Games next year.

The drill was held on Wednesday at two railway stations that directly service the airport's international passenger terminal. About 250 people, including railway officials and police officers, took part.

Officials at Narita Airport near Tokyo have held a counterterrorism drill as the country prepares for large-scale international events for two consecutive years.

The Rugby World Cup will be held this fall and the Olympics and Paralympics will take place the following summer.