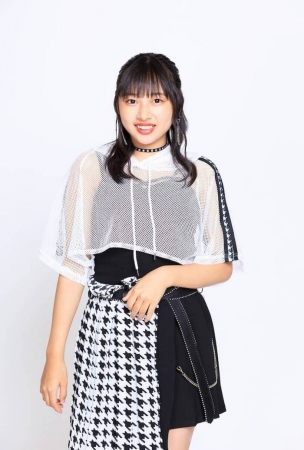 It's been announced that ANGERME member Oota Haruka will be going on hiatus.

Reportedly, Oota violated a Hello! Project rule and admitted to doing so. Up Front Agency decided to "give her some time to reflect and think about what she has done with the awareness that she is a member [of Hello! Project and ANGERME]." They added, "As her agency, we are taking this case very seriously and plan to coach her from the basics."

It's been announced that SKE48 member Okada Miku will be taking a break from her activities after being diagnosed with corneal ulcer.

Okada visited the hospital the other day after feeling pain in her eye. After an examination, the doctor found that it was corneal ulcer and instructed Okada to take a break and rest.

On January 27, Arashi held a press conference regarding their hiatus.

At the beginning, leader Ohno Satoshi greeted, "We made this announcement to our fans earlier. It has been decided that Arashi will take a break after December 31, 2020." When asked by reporters, "What are the details that led to this decision?" Ohno explained with a serious face, "I asked the members to get together in the middle of June in 2017 and told them how I felt. I wanted to temporarily end my activities in Arashi. I told them that I wanted to be active independently, and after discussing it multiple times, we reached the decision to take a break." He continued, "After sharing my feelings, I met with the members individually and listened to their feelings. Then the five of us met many times to talk about it, and finally had people from the agency join in on the discussion. We explained this to the agency in February of 2018, then made the decision in June of 2018."

On January 27, Arashi announced through Johnny's fan club site that they would be going on hiatus after December 31, 2020.

In a video announcement, leader Ohno Satoshi reported, "After many discussions, we, Arashi, will be going on hiatus after December 31, 2020." The group will be celebrating their 20th anniversary in 2020, and so, they felt it was the right time to "walk different paths."

It's been reported that NGT48 member Sugahara Riko will be going on hiatus after receiving surgery on her left knee.

Sugahara injured her knee last year and had been continuing her activities within a reasonable range. She received surgery on January 15 seeking a complete recovery. While she is doing well after surgery, it will be about three or four months until she can perform on stage. She plans to continue updating her social networking sites at her own pace.

Nishino Kana has announced that she will be going on hiatus after her 3-day concert 'Kana Nishino Love Collection Live 2019' at Yokohama Arena on February 1-3.

Last year, the singer celebrated her tenth anniversary, and she will be turning 30 this March 18. On her hiatus, she commented, "I'll almost be in my thirties. It's something I've looked forward to for a long time. I love to travel, and there are a lot more places I would like to see. I also have many things I want to do. After next month's lives, I will take a break from my activities and challenge myself to various things without setting a due date. Nevertheless, I love singing, so I feel like I will continue to sing everyday. I want to enjoy music daily until the day I will sing in front of everybody again. Finally, I want to express my gratitude to those who have always supported me. ☆Thank you☆."

It's been announced that Keyakizaka46 member Hirate Yurina will be going on hiatus to focus on treatment for sacroiliac joint dysfunction and distal radius fracture.

Hirate, who had been in poor condition from before, received detailed examination, and as a result, was diagnosed with sacroiliac joint dysfunction due to bruised lumbar spine and sprain of the sacroiliac joint, and distal radius fracture (broken wrists). While she will refrain from dance performances, the group's official website states that she will take part in some of her activities as long as it does not pose a burden on her condition.

AKB48 Team 8 Okinawa representative Miyazaki Rira will be taking a hiatus from October 1.

Team 8's official website explained that Miyazaki will be taking a hiatus in order to focus on her school work. It states, "During her hiatus, she will be taking a break from her private mail, various SNS accounts, and handshake events." On her return, they said, "We will make the announcement when the prospects look brighter."

'Jive Turkey' is a live series that the band held in 2016 and 2017, making this their third consecutive year to hold the tour. This year, Nagoya Blue Note has been added to the venues.

On August 28, Wentz Eiji announced that he would be temporarily halting his activities to study abroad in London beginning in October.

Eiji made the announcement when he appeared on the NTV variety program 'Kayou Surprise.' "I will take a break from all of my activities in Japan at the end of September. From October, I will go to London to study stage acting," he revealed.

It's been announced that SKE48 member Matsui Jurina will go on temporary hiatus to focus on recuperating from poor health.

As you may know, Matsui placed first in the 'AKB48 53rd Single World General Election' held last month. SKE48's official website explained, "Since before, she had continued to be in poor health and had been absent for a part of her activities, but at this time, she will be taking a break from SKE48 and 48 group activities in order to focus on recuperating."

the HIATUS will hold a nationwide tour, titled 'Monochrome Film Tour 2018,' from October.

For this tour, the band will be performing at venues with distinctive features such as Sapporo Geijutsu no Mori Art Hall, which has a museum in its premises, and Iwate-ken Kokaido, which is a registered tangible cultural property. You can check out the tour schedule below.

Rock band sads have announced that they will go on hiatus at the end of the year.

The band made this announcement on their official Twitter account. Prior to their hiatus, they are scheduled to hold a nationwide tour 'The reproduction 7th anniversary TOUR: FALLING' from July and release their new album "FALLING" at the live venues.

Jero has announced that he will be going on an indefinite hiatus.

This spring, Jero graduated from Boston University's graduate school. On this occasion, he has found a job in the computer field and will be halting his music activities.