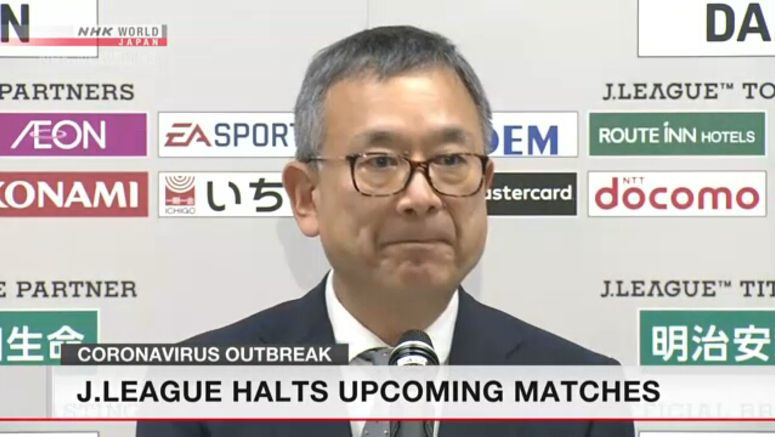 Japan's professional soccer league, J.League, is postponing all official matches for the next three weeks in response to the spread of the new coronavirus.

J.League Chairman Mitsuru Murai announced at a news conference on Tuesday that all 94 matches scheduled until March 15 will be postponed. The matches include those for the top J1, J2 and J3 divisions.

This is according to a job listing on Riot’s website in which it seems to reference the Nintendo Switch. While there is no specific reference to Wild Rift on the Switch, it does seem to call for developers who are familiar with shipping cross platform games, covering the Xbox, PlayStation, and the Switch.

There is also a position for a software architect where according to the job requirement’s description, “Experience and understanding with two or more of the following platforms: Microsoft Windows OS (desktop), iOS or Android OS (mobile), XB1, PS4, Nintendo Switch (console).”

Nissan will send 363 Leaf hatchbacks and e-NV200 vans to the UEFA Champions League Final in Madrid, creating a fleet that will cover more than 220,000 all-electric kilometers (136,700 miles).

J.League and the company announced on Friday that they will co-host the tournament, which will take place in July.

Rocket League allows for cross-platform play amongst Xbox One, Nintendo Switch, and PC gamers. Unsurprisingly given Sony’s stance, the PS4 is not part of that list. However Sony recently made headlines by announcing their decision to finally allow cross-play for Fortnite, which led to many wondering about other games Sony had denied in the past.

The game will be priced at $49.99 which you might have noticed costs $10 more than the regular version of the game. However this is the Ultimate Edition which means that it is expected to contain additional items such as various DLC packs for the game, which includes the Batman V Superman: Dawn of Justice Car Pack, the Chaos Run DLC Pack, the DC Super Heroes DLC Pack, the Revenge of the Battle-Cars DLC Pack, the Supersonic Fury DLC Pack, along with Aftershock, Esper, Marauder, Masamune, Proteus, Triton and Vulcan DLC Battle-Cars.

League officials have decided to expel 2 former Nihon University American football coaches over a dangerous foul that has made headlines in Japan.

The incident has become the subject of debate as one of their players confessed that the coaches ordered him to take a cheap shot.

The move was announced at a news conference in Tokyo on Thursday, with the Barcelona legend in attendance.

As Nintendo Switch owners are probably aware, the console isn't quite as powerful when compared to the likes of the PS4 Pro or the Xbox One X, which means that in terms of graphics, there is only so much developers can do at pushing the boundaries of the hardware. However the good news is that the developers of Rocket League will be bringing an upgrade to the game.

Rocket League has been launched on the Switch several months ago, but according to the developers, there are plans to introduce an update to the game later this year where it will improve upon the game's graphics. This upgrade will see the game's resolution bumped to 900p when docked, and 720p when in handheld, and it will also run at 60fps.

It has been a few weeks since we launched GT Sport, and it's been really exciting to see so many people take to the track. In fact, we've already seen over 26 million hours of gameplay around the world, so now we want to share with you our plan for what's next with the game, including new cars and game features through Patch 1.06 in November, and the introduction of the "GT League" in December.

Earlier this year it was announced that popular game Rocket League would be arriving for the Nintendo Switch. It was later confirmed that the game would be released on the 14th of November, so if you own the Nintendo Switch, you'll want to fire up the Switch's eShop (or head over to a retailer) because the game is now available for the console.

According to Nintendo's description of the game on its website, "Take to the pitch for a fully-featured offline season mode, multiple game types, casual and competitive online matches, and special “Mutators” that let you change the rules entirely. Express yourself with one of the deepest customization systems around and battle opponents on other platforms with groundbreaking cross-network play!"

In bringing the "League of War" universe to PS VR, MunkyFun had a number of options. We wanted the game to be "pick up and play" for anyone, while also having deeper strategy for the more serious gamers. But one of the biggest considerations for us was to push hard on developing the two-player head to head aspect of the game, to effectively bring "Social" to VR.

As previously confirmed, the Nintendo Switch version of Rocket League is going to feature three Nintendo-themed cars. They’re called the Mario NSR, Luigi NSR, and Samus’ Gunship. All three cars will be included in the title for free, but players will need to unlock them first.

Yamaha had the perfect day at the 8 Hours of Oschersleben, round three of the 2017 FIM Endurance World Championship, as they completed a lockout of the podium and also took victory in the Superstock class. The GMT94 Yamaha Official EWC Team made it two race wins in a row after an epic 8-hour duel with the YART Yamaha Official EWC Team, taking victory by just 30 seconds in the end. The Mako Racing Team completed a Yamaha 1-2-3 by snatching the last step on the podium in the dying moments and the MOTI AIN CRT Team made it a clean sweep by winning the Superstock class.